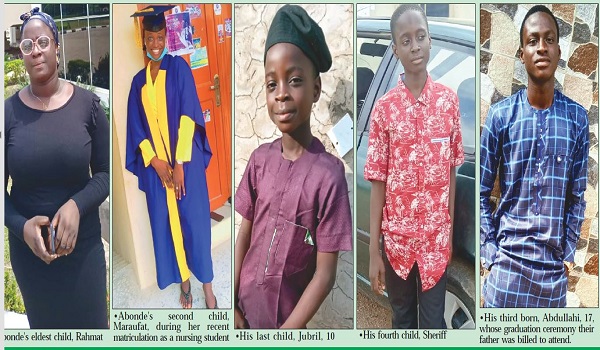 He was not just a father to his wife and children; he was their idol, their friend and confidant. They looked forward to welcoming him home in Osogbo, the Osun State capital, on Friday for the graduation ceremony of his teenage son. But their hopes were dashed last Thursday evening as riotous and blood-thirsty commercial motorcyclists hacked their dad, Chief Superintendent of Police (CSP) Kazeem Abonde to death at Ajao Estate in Isolo, Lagos where he led a team of policemen to enforce the Lagos State Traffic Laws.

The family, according to Abonde’s eldest child, Rahmat, a 400-level law student, has been devastated since Thursday night when they saw news of the incident on the internet.

“We are still in denial. We are shocked. Just imagine seeing news about what happened to your father on the internet! That was how we knew.

“I was the only one with my mum that evening. I had just returned from where Chamber Attachment that evening when my mum said she received strange calls from two people requesting the contacts of elders in my dad’s family.

“She also said she felt somehow and then logged on the internet where she saw a post about an incident in that area of Lagos. Knowing that my dad was going there, she called many times but no response.

“That was strange because my father will always pick calls from his family even if it is just to say I will call you back. But we called all his lines and at a point, someone picked and told us he was fine, that nothing happened to him as he was taken out of the scene and was in a hospital. The responses did not add up.

“As this was happening more people began calling my mother and before morning, the news was already everywhere that my dad was murdered in such cruel manner.

“No, not my dad. He did not deserve to be killed that way. My dad was too peaceful. I am sure he had gone there to broker peace. Those who killed him have taken everything from us. He was everything to us.

“My youngest sibling still doesn’t even understand what has happened. How do I explain to him? My younger brother, who my dad was planning to attend his graduation ceremony this Friday, has remained sad. My dad visited the previous weekend and gave money for his graduation attire to be. He also brought my law text books that I needed.

“He discussed his retirement plans with us and was very enthusiastic about taking on private practice. He was so happy that I am studying law and hoped all his children will also read law so that we can have a family chamber. But, his killers took those dreams away and shattered my family for life,” said Ramat who couldn’t control her emotions.

Continuing, she wondered who would train them, care for them, cheer them up and correct them with love whenever they did something wrong.

“Who is going to be there for us like our father? Is it the government? Or the police? Who will look after our mother now? See, if the government and the police do not ensure justice for my father, we will fight for justice ourselves, no matter how long it takes.

“It can only take years but I will fight if the government and the police fail to bring his killers to justice. I am in pains, my mother is inconsolable. My younger brothers and sisters are also helpless. I do not even know where to start from but my father cannot die like that. Not him!”

Asked if her family had been officially contacted by the police, Ramat said no, adding that it was only her father’s friends and colleagues who have been calling to condole with them.

The Lagos State Government yesterday condemned the savagery of Abonde’s killers in its first statement since the incident occurred on Thursday evening.

Sanwo-Olu, in a statement, said: “The government of Lagos State has noted with deep concern attacks on law enforcement agents by hoodlums. Such senseless attacks are attempts to trample on law and order by those who are desperate to turn our society upside down. This will not be allowed to happen.

“In the latest of such attacks, a Chief Superintendent of Police (CSP), Kazeem Abonde, was killed on September 23, 2021 in Ajao Estate by yet unknown hoodlums. I have directed the Commissioner of Police to ensure that all those who participated in this savagery are brought to justice.

“This is to encourage our law enforcement agents that we will always stand by them as they carry out their duties and, at the same time, send a strong signal to criminals that any attack on our officers will not go unpunished.

“Such display of savagery as the one in which CSP Abonde died will not be allowed in our state, no matter the circumstances.

“The law is there for us all, should there be need to redress any perceived wrongdoing. Citizens who take the law into their own hands are promoters of jungle justice, which will not be allowed to take root in our dear Lagos.

“I commiserate with the family of the fallen officer and the Police Command on the loss of this fine officer whose diligence and bravery have been applauded by his colleagues and relations. May The Almighty bless his soul.”