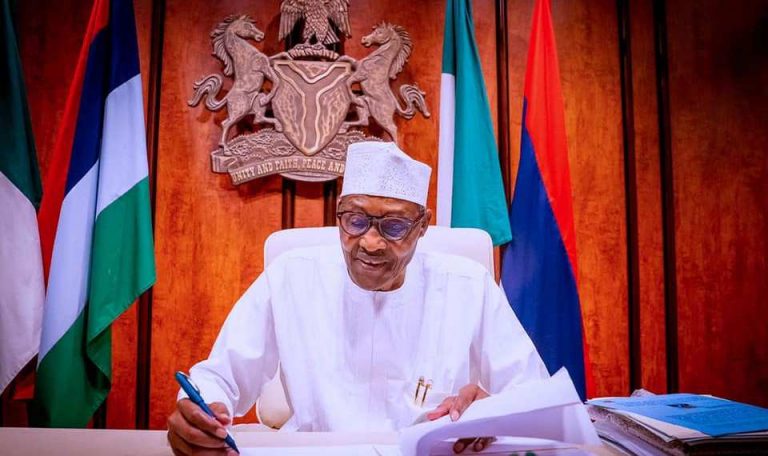 President Muhammadu Buhari, yesterday, received the forensic audit report of the Niger Delta Development Commission(NDDC) with a vow to prosecute those who mismanaged about N6trillion allocated to the commission for projects.

President Buhari specifically queried the operation of 362 accounts by the commission without proper reconciliation. He said between 2001 and 2019, the Federal Government, approved and released the total sum of N7trillion to the NDDC as income from statutory and non statutory sources.

He said the the Federal Government was particularly concerned with the colossal loss occasioned by uncompleted and unverified development projects in the Niger Delta Region, in spite of the huge resources made available to it to uplift the living standard of the citizens of the region.

He also expressed concerns with multitudes of NDDC’s bank accounts amounting to 362 and lack of proper reconciliation of accounts.

Buhari, represented at the presentation ceremony by the Attorney General of the Federation and Minister of Justice, Abubakar Malami (SAN), directed that the forensic audit report be forwarded to the Federal Ministry of Justice for legal review and relevant Ministries, Departments and Agencies (MDAs) to do justice to the findings.

“We have on record over 13,777 projects, the execution of which is substantially compromised. The Federal Government will in consequence apply the law to remedy the deficiencies outlined in the audit report as appropriate. This will include, but not limited to, initiation of criminal investigations, prosecution, recovery of funds not properly utilised for the public purposes for which they were meant for review of the laws to reposition and restructure the NDDC for the efficiency of better service delivery amongst others. In all these instances of actions, legal due processes will strictly be complied with.”

Minister of Niger Delta Affairs, Godswill Akpabio, who submitted the report, said though the exercise had a checkered history, the President and all those who supported and ensured its success should be commended.

He said the audit was not done to witch-hunt anyone, but to ensure that huge sums of funds committed to the development of the region through the NDDC yearly were judiciously used.

He said the report of the audit committee showed that their were over 13,000 abandoned projects in the Niger Delta, adding that even before the submission of the report, some contractors returned to site on their own and completed about 77 road projects.

He lamented that the region had remained backwards since 1958 in spite of successive governments efforts through the creation of various interventionist programmes and projects.

Lead Forensic Auditor, Alhaji Kabir Ahmed, in a brief overview of the report, said the team recommended managerial and structural changes, chief of which is the downsizing of NDDC board, with members appointed on part time basis.

The appointment of members of the board of the NDDC had been suspended until the release of the audit report. Ahmed also disclosed that oil companies in the country were still in default of their contributions to the commission.

It recommended that the government withdraw the licence of any oil company which defaults for a period of three years. It also recommended the deduction of 15 per cent ecological fund at source and paid to the commission as both the federal and state governments have failed to make payments to the commission. The team recommended as a measure of effective revenue collections, that the Federal Inland Revenue Services collects fund on behalf of NDDC from oil companies in the country.