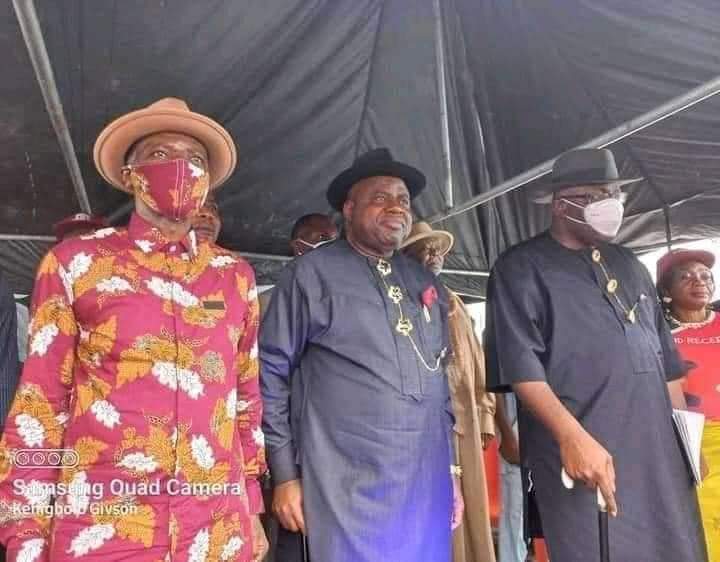 As Former Governor Dispels Rumours Of Rift With Successor

Bayelsa State Governor, Senator Douye Diri, has said the Peoples Democratic Party (PDP) remains the party of choice for Bayelsans and would be difficult to beat in any election in the state.

Speaking in Sagbama on Saturday during a grand reception in honour of leaders from Bayelsa West Senatorial District by the state chapter of the PDP, Governor Diri noted that the party was firmly rooted in the state and had embarked on projects that have endeared it to the people.

The governor urged the people of Bayelsa West to close ranks in order to consolidate on the party’s achievements.

He thanked them for the honour done him and other leaders of the district and solicited their continuous support, stressing that government alone cannot deliver development to the state.

His words: “I join all of our leaders and in particular our leader, Senator Seriake Dickson, and all of us in Bayelsa West that you thought it wise to honour to thank you. I thank you from the bottom of my heart. What you have done is an honour and honour would also find you.

“There is nothing we can do to pay you back. Only God can repay you.

“By Gods grace, PDP is still the party to beat in Bayelsa State. Today is not for campaign but it is a day for unity.

“Do not divide the house because you are yet to get appointment. This is one family and we would increase in number. We have been doing that and receiving defectors and returnees in their numbers.”

He explained that he deliberately maintained a distance from the incumbent administration as he desired to give his successor a respectable distance to operate.

Senator Dickson stressed that he was constantly in touch with Diri, especially on issues bordering on the development of the state.

He recalled with delight how the PDP emerged victorious in the last governorship election and expressed the optimism that the party would continue to win future elections in the state.

The immediate past governor charged party members to shun all forms of division and support the current administration, stressing that the PDP can only be strong when it is united.

The senator representing Bayelsa West lauded Diri for his developmental strides, saying he was proud of his successor.

He also thanked the people of Bayelsa West for the honour done him and other leaders of the senatorial district and pledged to continue to serve his people diligently.

In his remarks, the Deputy Governor, Senator Lawrence Ewhrudjakpo, thanked the people of the district also for the honour done him.

In separate remarks, the state PDP chairman, Solomon Agwana, the Bayelsa West caucus leader, Chief TKO Okorotie, Chief Fyneman Wilson and
Michael Magbisa all eulogised Governor Diri and leaders of Bayelsa West for their services to people of the area.

Highpoint of the event was the presentation of award of honour to Diri, his deputy, Dickson and the member representing Sagbama and Ekeremor in the House of Representatives, Dr. Fredrick Agbedi.

Related Topics:PDP Still Party To Beat In Bayelsasays Diri
Up Next