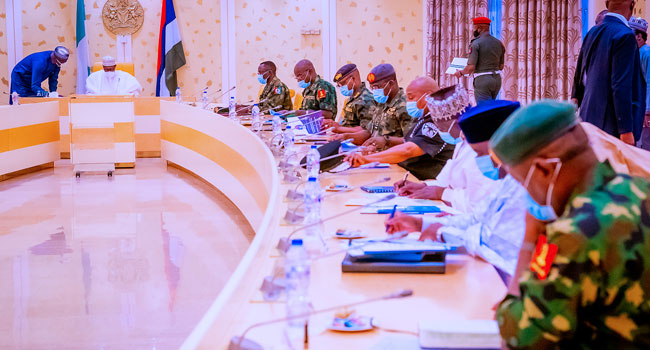 President Muhammadu Buhari has today given a new marching order to all the service chiefs and intelligence chiefs to go and reinvigorate efforts and to do more so that the alarming security challenges in the north-central and Nigeria at large can be tackled headlong.

President Buhari gave the directive today when he met at the Presidential Villa in Abuja with the nation’s Security Chiefs and heads of security agencies.

The crucial meeting is attended by some ministers and operators of the nation’s security architecture, at the Presidential Villa in Abuja.
The NSC meeting is meant to provide updates on recent security operations in different parts of the nation to the president by security and intelligence chiefs.

Those attending the meeting held at the conference hall of the First Lady’s office include the National Security Adviser (NSA), Major-General Babagana Monguno (rtd);

Addressing State House correspondents after the meeting, Minister of Defence, retired General Bashir Magashi said the President is deeply concerned about the deteriorating security situation and charged then to do more to tackle the problem

Oil Production: Saudi Arabia Has Been Kind To Us, Says Buhari