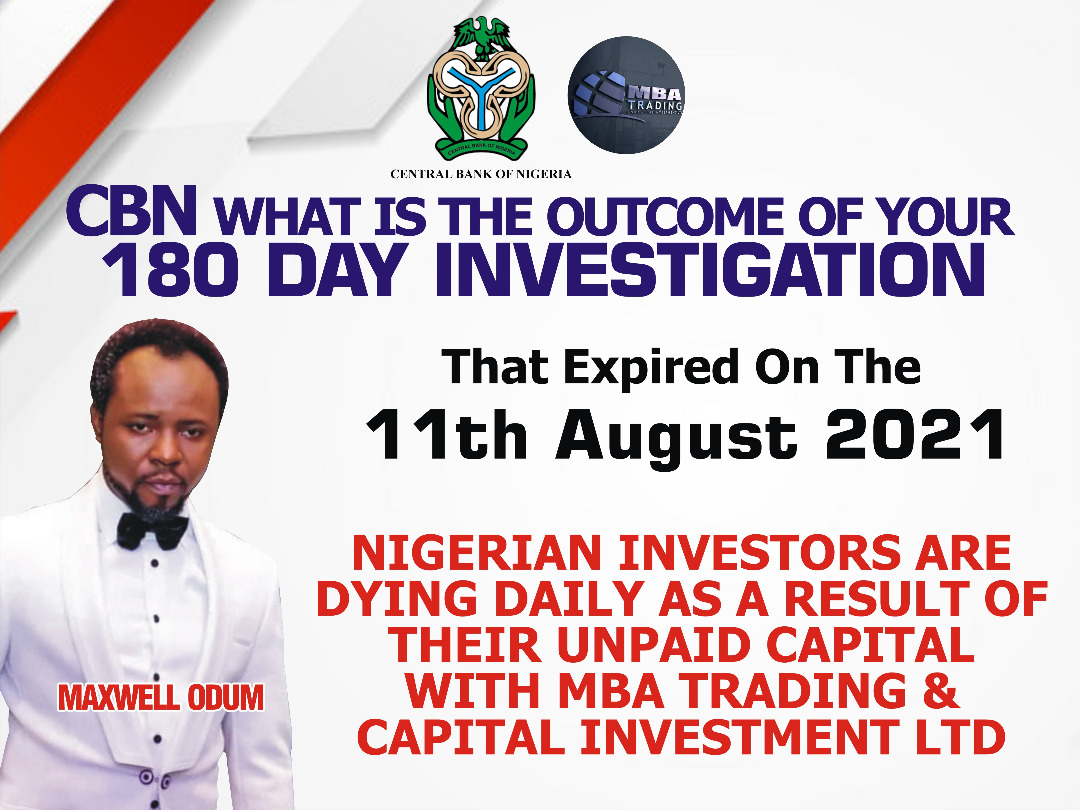 PORTHACOURT____Aggreived investors of MBA TRADING AND CAPITAL INVESTMENT LTD embarked on a peaceful protest to the offices of CENTRAL BANK OF NIGERIA (CBN). And the ECONOMIC AND FINANCIAL CRIMES COMMISSION (EFCC). In Porthacourt, Rivers State. 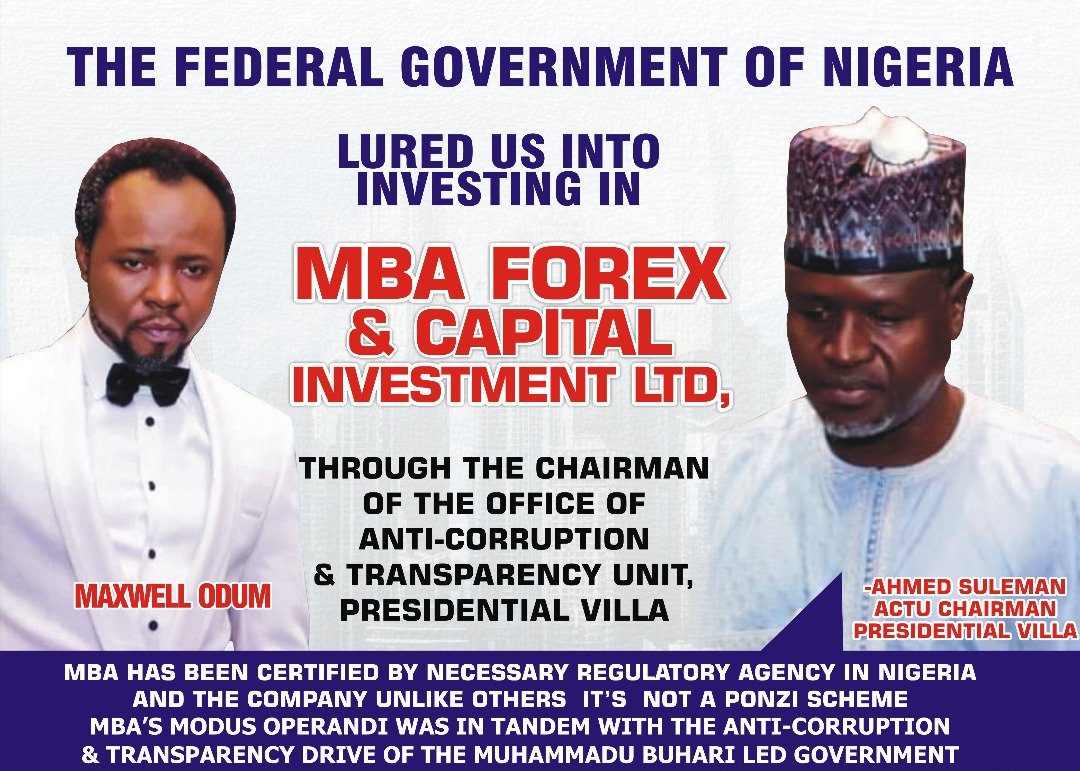 Requesting the outcome of CBN investigation after getting an interim court order in a legal suit with Number FHC/PH/MIsC/35/2021, filed before the Federal High Court sitted in PortHarcourt on the 10th of February, 2021, to stop all debit transactions from MBA accounts pending the outcome of the said investigation.

The aggreived MBA Investors who barricaded the CBN office decried that the 180 day of investigation period has since elapsed on the 11th of August 2021, and the CBN nor the Anti-Corruption agencies has said nothing about the outcome of their investigations. 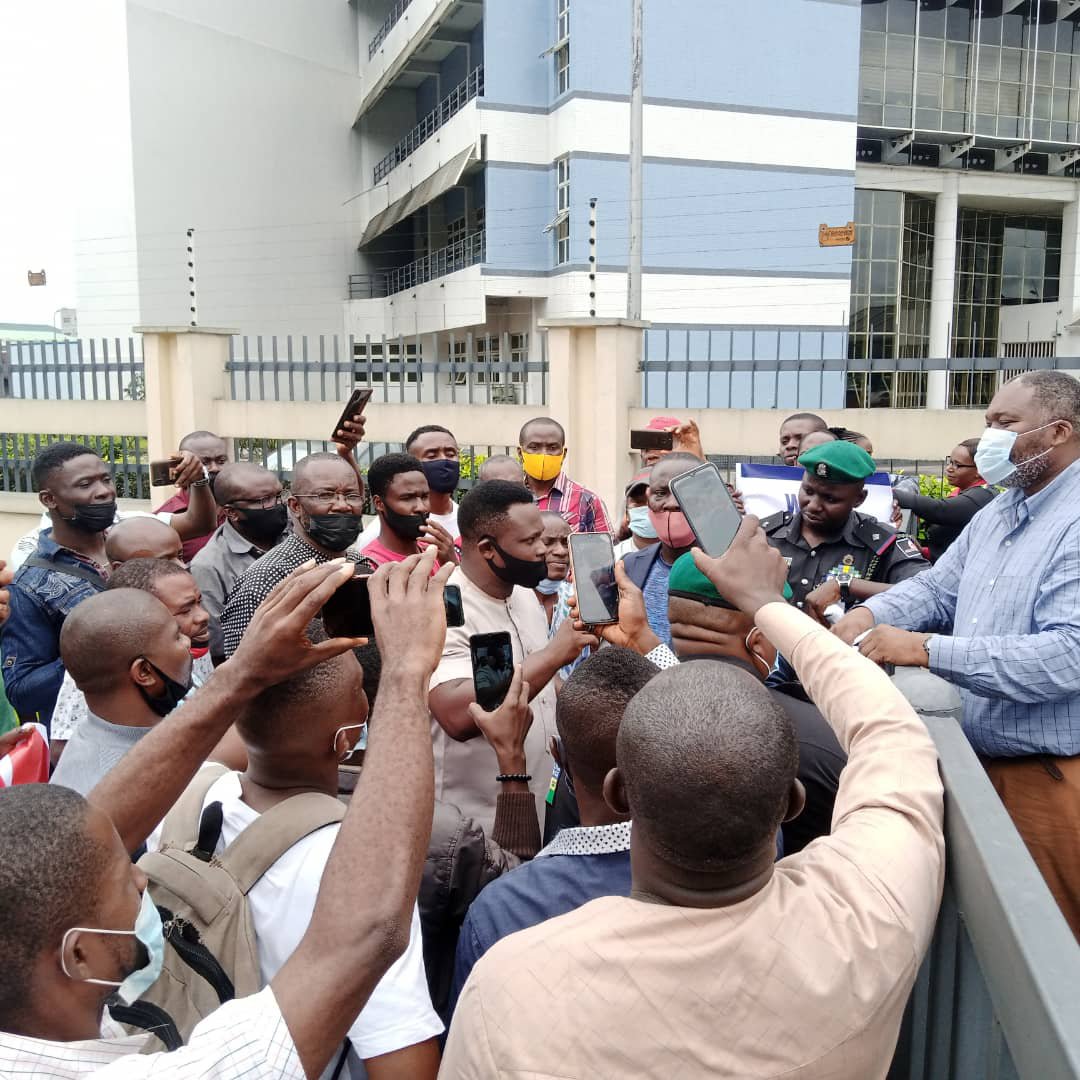 One of the protesting Investors Mr Henry Benibo while submitting groups formal letter to the CBN official representative, said he was persuaded to invest in MBA the sum of 3,500,000 after watching press conference unveiling MBA trading & capital investment ‘Bare to Blue Banquet that was held in Lagos on 16 and 17th of August 2019.

The CEO of MBA Maxwell Odum warned Nigerians not to see forex trading as gambling, saying MBA Forex and Capital Investment Limited is registered and certified by the Central Bank of Nigeria, CBN.

He also added that the company has also been cleared by the Economics and Financial Crimes Commission (EFCC).

Also in attendance was His Excellency, Secretary to the Government of the Federation (OSGF).

According to him, “MBA Forex and Investment Limited has been certified by necessary regulatory agency in Nigeria, and that the company unlike others before it is not a ponzi scheme”.

Suleiman noted that “MBA’s modus operandi was in tandem with the anti-corruption and transparency drive of the current administration”.

investors will get the refunds of their capital funds saying efforts are in place to commence payment even as some investors have already received their funds. 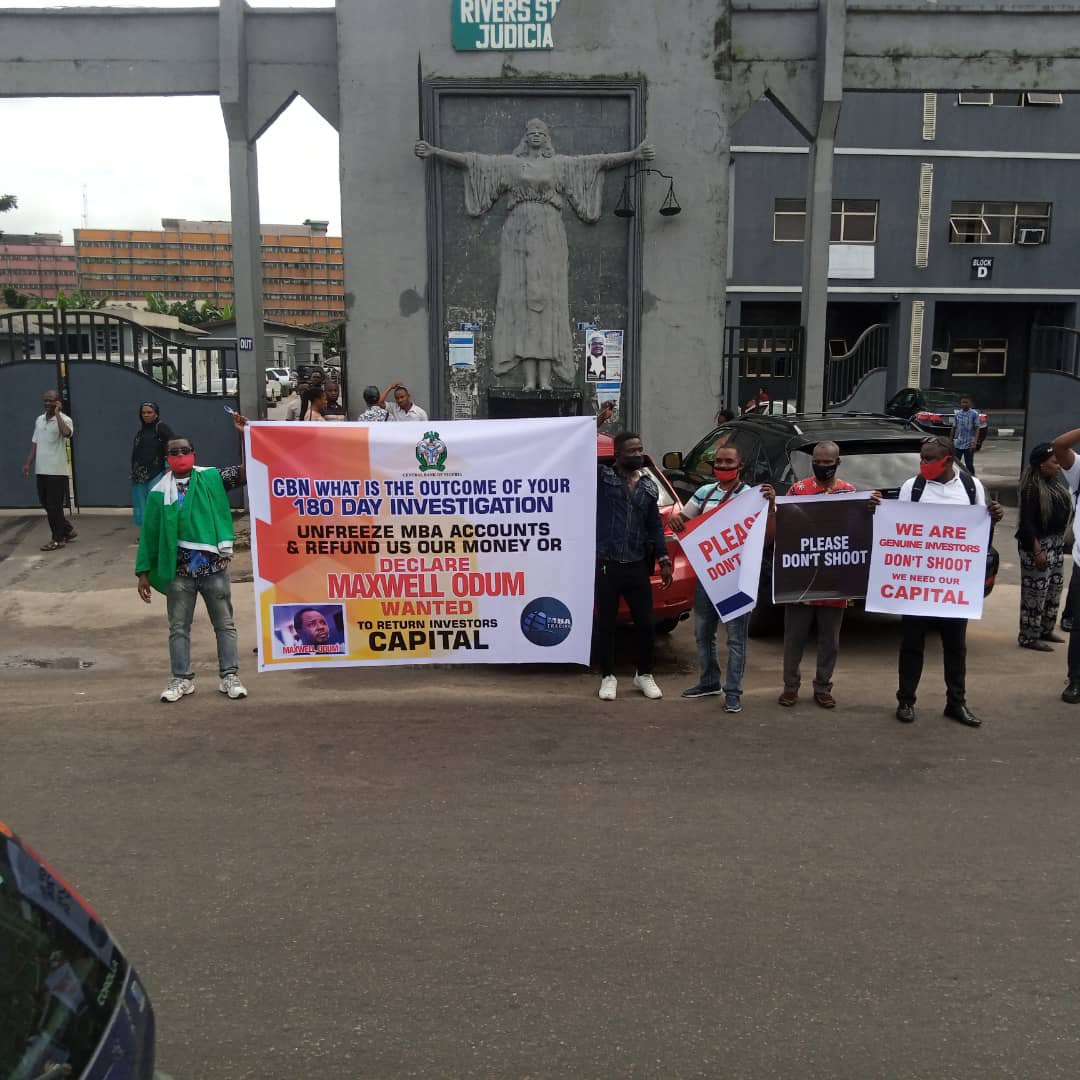 Odum who debunked the insinuation that it engaged in another notorious Ponzi scheme maintained that, its major stakeholders never committed any fraud.

Mr Emma who invested 4,000,000 pleaded with the anti graft to swing into intensive investigative action as the Nation’s law enforcement agency that is saddled with the responsibility to prevent, investigate, prosecute and penalise economic and financial crimes and is charged with the responsibility of enforcing the provisions of other laws and regulations relating to economic and financial crimes to investigate financial crimes such as this and to openly inform Nigerians exactly what is going on or has gone wrong with Investors capital to the tune of N171,128,219,041 (One hundred seventy-one billion one hundred twenty-eight million two hundred nineteen thousand forty-one Kobo). by 125,397 (one hundred and twenty five thousand three hundred and ninty seven) Genuine hardworking Nigerian investors into coffers of MBA trading & capital limited. 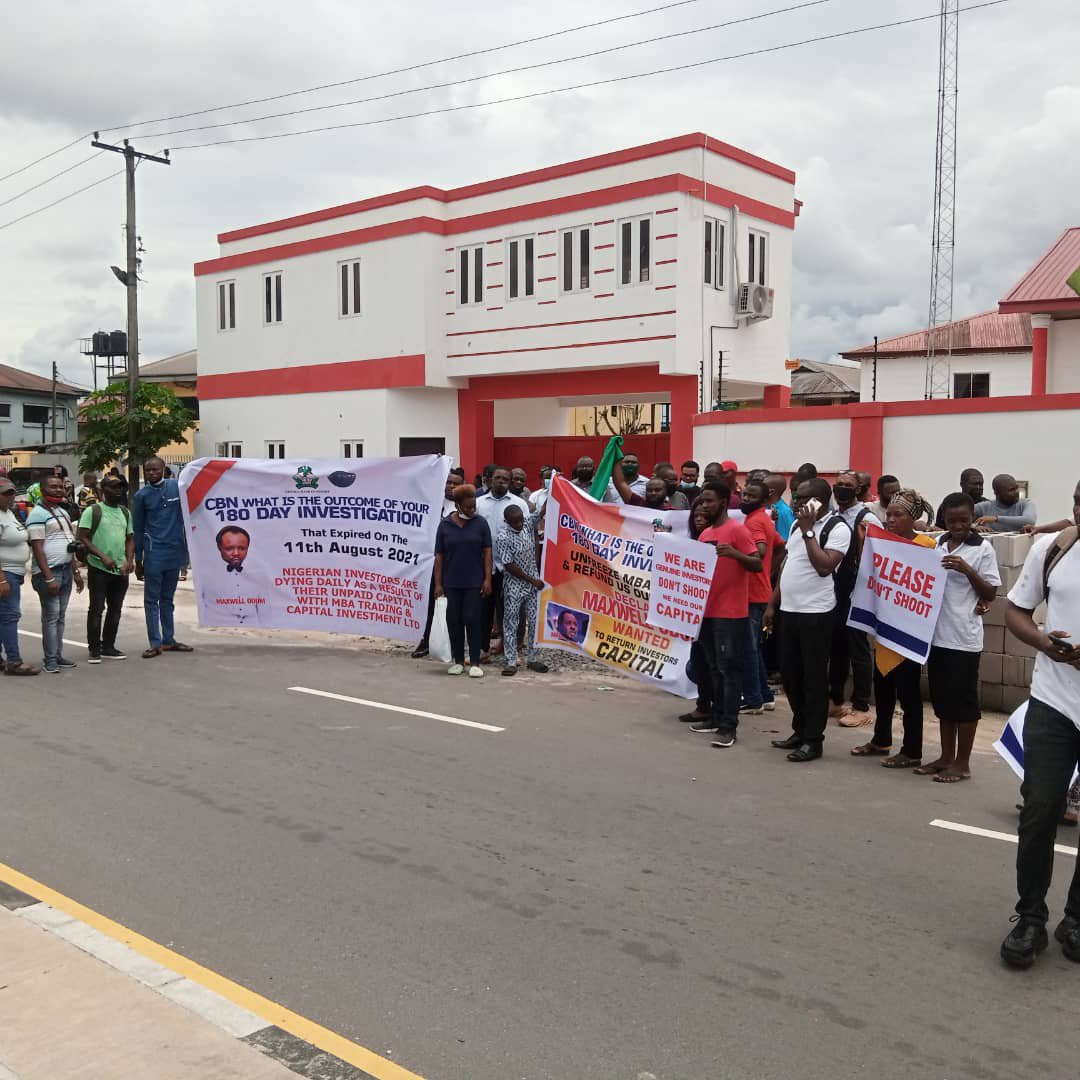 Another aggreived investor who spoke to our correspondence named Mrs Mercy Okoro said she highlighted from the bus on her way to the her office when she saw the protest by MBA investors she noted that her life has never been same since her investment in MBA which turned her life upside down having invested her savings for 6yrs with the trading company, she called on President muhamudu and the Anti-Corruption agencies to not allow the poor citizens of Nigeria to languish any further in investments schemes certified by same Government agencies and representative.

Noted that on behalf of the Central Bank of Nigeria feels the pains of the protesting Investors and it’s because of these pains CBN took the action to freeze and investigate the accounts of MBA, as one of the apex banks obligation is to provide an efficient payment system and when we see that the payment system is not being efficient CBN would step in immediately, he further urged the aggreived investors not to disabuse their minds because CBN is pro-investors assuring the Investors that the matter is being looked into, however we are in a structured country this matter is in court we cannot preempt the court but can assure the MBA Investors that Dr Godwin Emefiele is interest in this case given the action he took at the last NPC meeting he went against those who feel they can change the rate of Nigeria and we can see he is succeeding, the CBN Governor is cleaning the system to make sure it is effective so that each and every Investor would get respite urging the Investor to await till after abitration now until the arbiter which is the federal high court speaks that is the only time we would know the outcome of the investigation, he added.
The aggreived protester who a 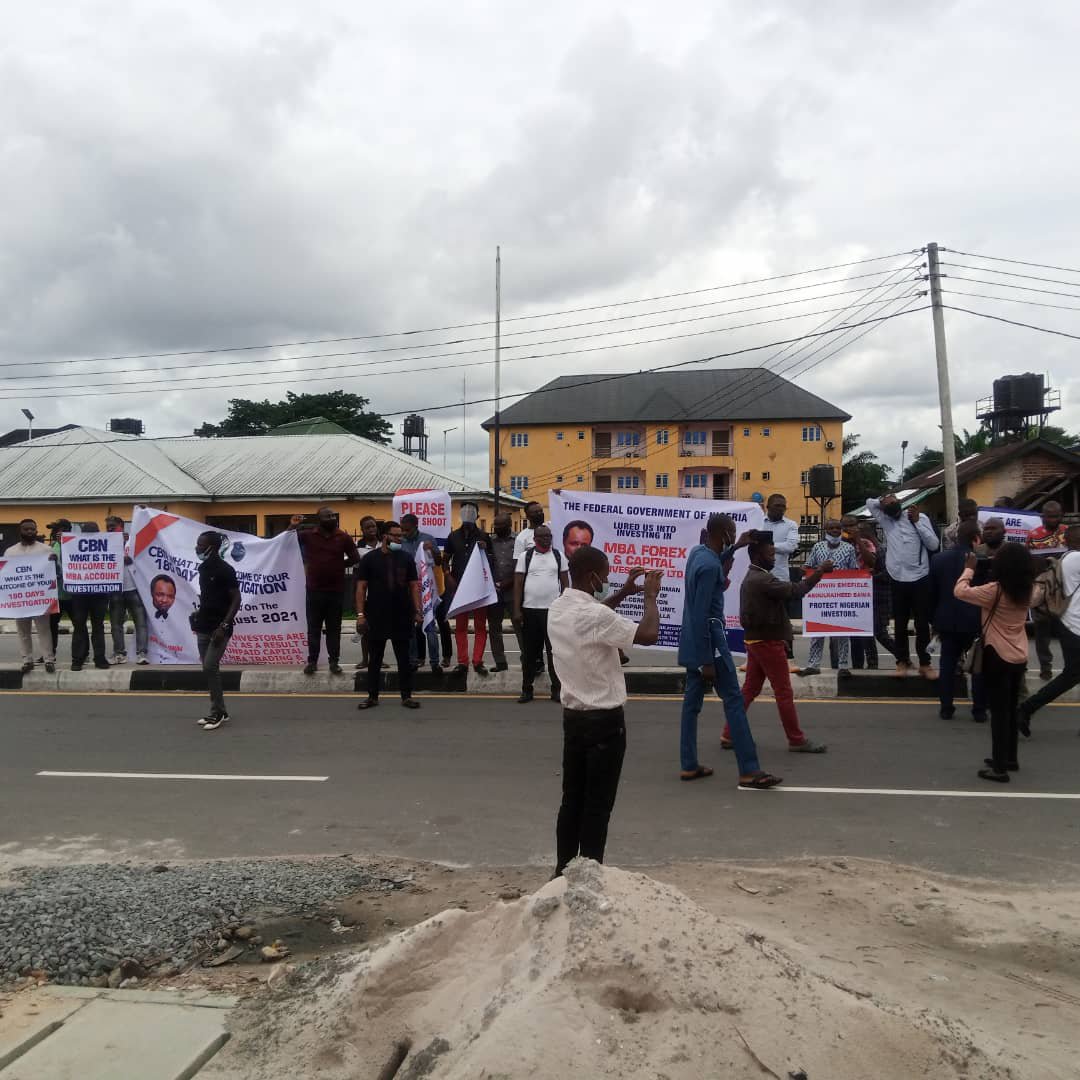 lso stormed the EFCC chanting their slogans “What want our capital back”
“we believe in Nigeria, we believe in the Bawa of EFCC”
was well received by Mr. Ani Davis Stanley, a Principal Detective Superintendent, he thanked the protests for organizing themselves in a peaceful way and also assured them that the EFCC has received hundreds of petitions from investors and is currently still investigating the matter assuring the aggreived but peaceful protesters that the EFCC under the leadership of
Abdulrasheed Bawa will leave no stone unturned in investigation of Nigerian Investors investments in MBA TRADING AND CAPITAL INVESTMENT LTD. 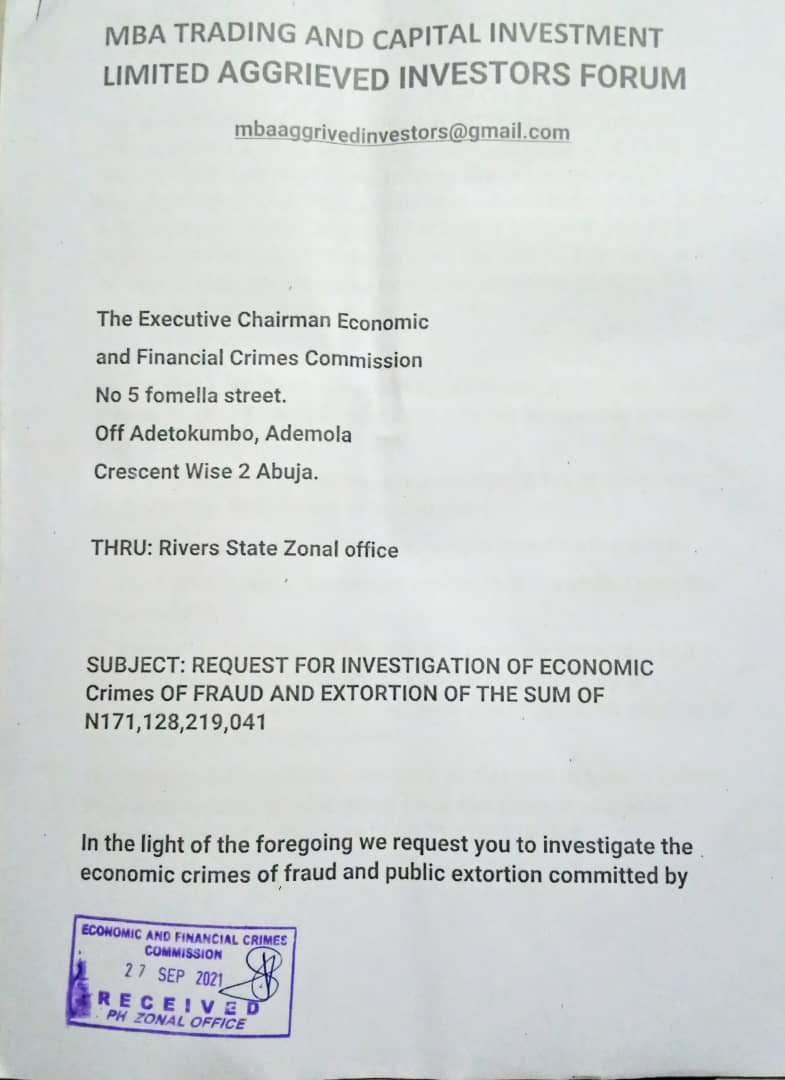 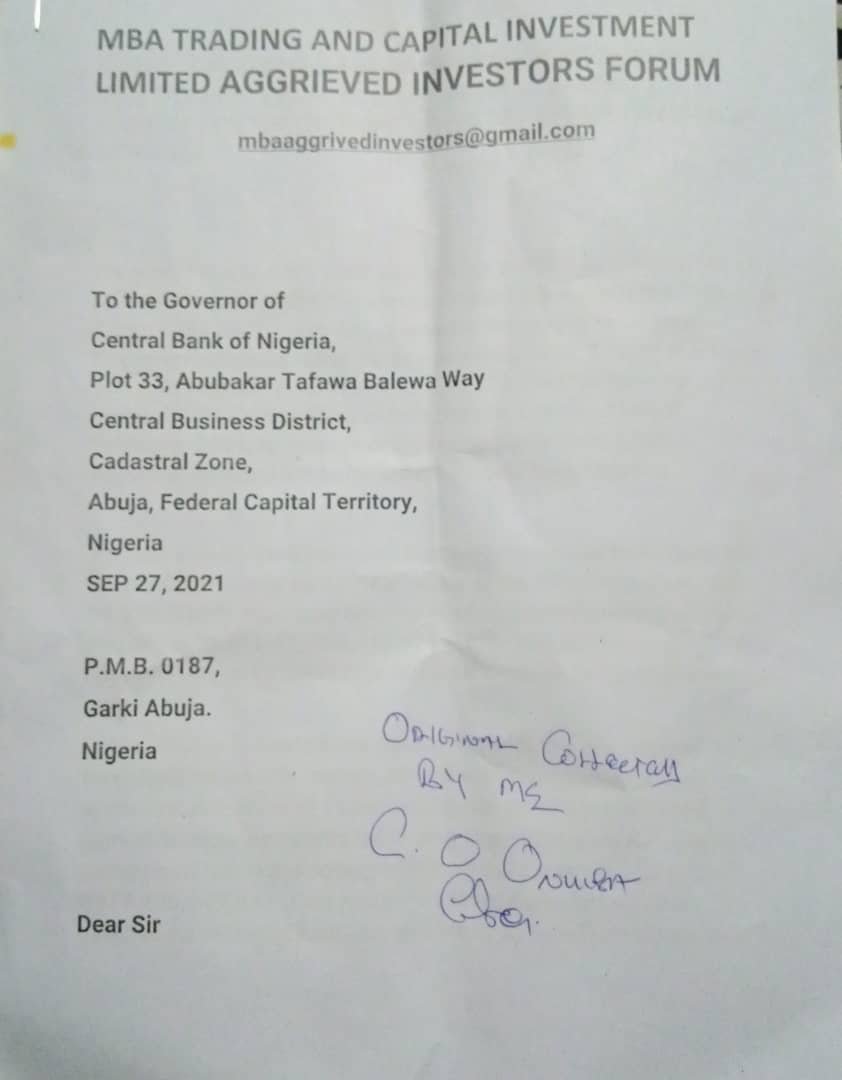 Related Topics:Rivers State MBA Investors On a Peaceful Protest Requesting For The Outcome Of 180 Days Investigation By CBN On MBA Trading And Capital Investment LTD
Up Next