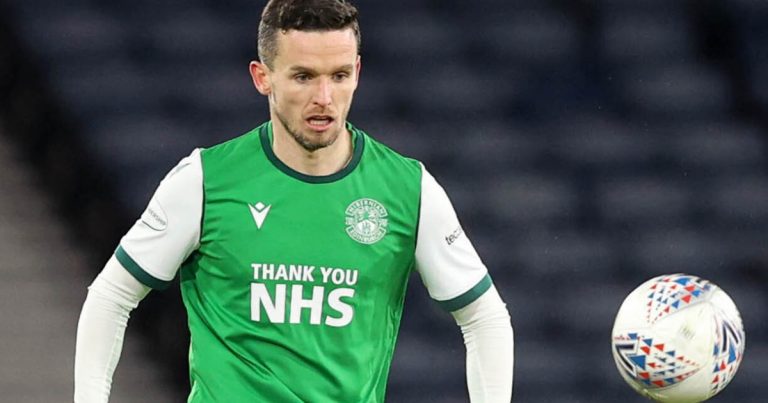 Hibernian defender Paul McGinn has been called into the Scotland squad after Steve Clarke lost three key members of his squad.

Ryan Fraser, Kenny McLean and Nathan Patterson have all withdrawn from the squad which has prompted Clarke to draft in the 30-year-old.

This comes ahead of a crucial World Cup qualifier against Austria on Tuesday night.

McGinn’s younger brother, John, is a mainstay in the Scotland squad and key player for Aston Villa in the Premier League.

The Hibs man was first called up by Clarke for the double-header against Slovakia and Czech Republic last October but did not feature in either game.

Fraser and McLean both started the 2-0 defeat in Denmark last week, while Patterson impressed in Saturday’s 1-0 win over Moldova, but none of the trio will be available for the showdown in Vienna.

The latest call-offs further deplete a squad that has already been ravaged by injury and Covid-related issues.

The Austria match is the third for Scotland in six days as this international break has been extremely demanding.

Saturday’s performance against Moldova left a lot to be desired – as Hampden Park welcomed fans without any restrictions for the first time since the coronavirus pandemic.

They missed numerous chances and failed to impress the 40,000 in attendance, but got the win in the end.

“We obviously created loads of chances but we never had the clinical finish at the end, but we did well to keep a clean sheet, see the game out and got the win,” Patterson said.

“We got the three points, which was the main focus, and now we can go over to Austria with a little bit of form and hopefully we can take the game to them.”

The victory sees the Tartan Army sit third in Group F, two points behind Israel, who beat Austria 5-2 on Saturday.

Denmark are running away with the group – scoring five wins from five – which leaves it between the Scots, Israelis and Austrians to fight for second place in the group.

This makes Tuesday’s match in Vienna vitally important for Clarke and his players.

Related Topics:Arsene Wenger’s woeful World Cup plan is born of boredom
Up Next