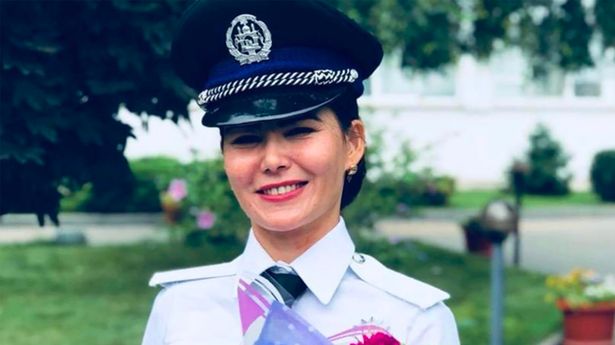 Gulafroz Ebtekar, the officer, is currently on the run after failing to get on an evacuation flight out of the country.

The 34-year-old was singled out and beaten brutally by the Taliban at the gates of Hamid Karzai international airport in Kabul.

She told Russian Newspaper, Moskovsky Komsomolet, that she spent five nights at the airport, seeking evacuation.

“I spent five nights at the gates of Kabul airport without water or bread, in a rain of bullets and surrounded by the Taliban.

“I witnessed the death of children and women. I sent messages to the embassies of many countries to save myself and my family, but all to no avail.”

After being turned away from the airport, Ebtekar went home to be told by her mother that the Taliban had come for her while she was out.

When she tried to escape to the airport again, the Taliban guards beat her with “weapons and stones”.

“All their words were accompanied by blows. When I was hit again, I could not get up, I could not say a word”.

“The Taliban acted like this: first they hit, then allowed you to move. You take one or two steps, and pay for it.

They beat me with fists, boots, weapons and even stones”.

With the soldiers still on her trail and no more flights leaving the country, she has little hope about survival

As well as the violence from the Taliban, she said her faith in humanity was crushed by her treatment from troops guarding the airport.

She was asked where she wanted to go and told them: “It doesn’t matter, to a safe country where there is a chance we may survive”.

They looked at me and answered quite impudently: “Okay”. And they asked one soldier to show us the way. I thought they would escort us to a plane or provide security.”

They first escorted her to a crowded street where there was a terrorist attack, she said.

“We did not want to leave, then the soldier raised his weapon: “Get out of here’. So we went out onto the road.

At that moment, I didn’t want to live anymore”.

Gulafroz, who bagged a master’s degree from a top police academy in Russia, also reached out to the Russian embassy but they declined because she didn’t have a Russian passport or residency.

She told the newspaper:-

“I had dreamed of changing life in Afghanistan. First, when it comes to women in the police. And I did it.

“When I returned to my homeland, I got a job in the Ministry of Internal Affairs, and soon got a rather high position.

“I became Deputy Chief for Criminal Investigations of the Ministry of Internal Affairs of Afghanistan.

“I spoke on television, spoke out on social networks, fought against extremism, terrorism, advocated for the rights of women and children and believed in the best for our country”.

She said that her “former life” was gone, and that six months ago, she’d been ‘warned’ by the Taliban about her job.

“The Taliban wrote me letters in which they said that I should not work in the police, that I had no right to declare about women’s rights.

”What are women’s rights? Why do you publish your photos on Facebook and Instagram?” these are the comments I received from them a year or six months ago. And now they are in power.”

“I think the Taliban will never change. They will not agree for a woman to work, participate in public life, and be free”.