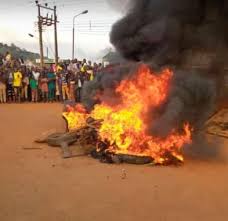 The incident happened on Thursday after the suspects robbed a POS operator and ran away with the POS machine.

The robbery victim immediately raised the alarm which attracted the attention of residents.

It was gathered that the suspects attempted to escape.

But some youths gave them a hot chase and caught them at Mgbee.

After lynching the suspects, the mob took the bodies back to Affor-Ukwu market, where they were set ablaze.

They used three used tyres, sprinkled petrol on them, put them on the dead suspects in the middle of the road, and set them ablaze.

Imo State Police Command is yet to comment on the incident.

Related Topics:Three POS robbers set ablaze in Imo
Up Next

Nigerian lady shot dead by her Italian husband, after she reportedly filed for divorce. – Photos