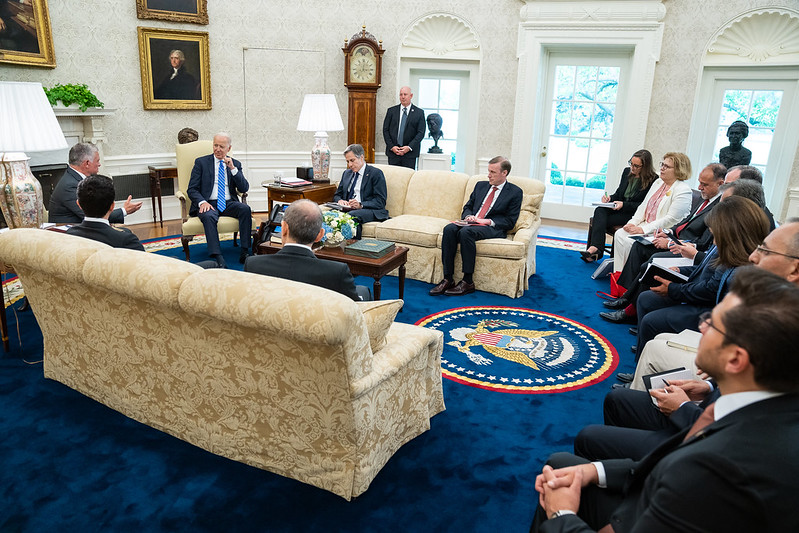 The Biden administration said on Wednesday that it supports the appointment of former Nigerian President Olusegun Obasanjo as special Envoy for the Horn of Africa amid Ethiopia’s Tigray crisis.

Obasanjo’s first task will be to lead talks between the Ethiopian government, the Tigray Defense Force and other actors in the region for a possible diplomatic solution to the 10-month-long war that has killed many people and left others starving.

On August 26, the Chairperson of the Commission of the African Union, Moussa Faki Mahamat, announced the appointment of Obasanjo as his High Representative for the Horn of Africa region.

Mahamat described Obasanjo’s appointment as part of the African Union’s drive to promote peace, security, stability and political dialogue all over the Horn of Africa region.

“Specifically, the High Representative will intensify engagements with all relevant political actors and stakeholders in the region towards entrenching durable peace and stability within the Horn of Africa,” he said in a statement. “The former Nigerian Leader brings with him very rich political experience, and impeccable credentials of keen commitment to the lofty ideals of Pan-Africanism and regional integration and cooperation, as well as a deep knowledge of the current situation in the Horn of Africa.”

Mahamat called on all stakeholders and the international community to extend “every possible support to the High Representative, who is expected to arrive the region in the coming weeks.”

On Wednesday, the United States Ambassador to the United Nations, Linda Thomas-Greenfield, said the Biden administration supports efforts to bring about peace and stability in Ethiopia and the appointment of Obasanjo to serve as a mediator.

“We support efforts by the Elders to advise on Ethiopia, and we support the appointment of President Obasanjo as the Special Envoy for the Horn,” Thomas-Greenfield said in remarks at a UN Security Council Briefing by the Elders on the Maintenance of International Peace and Security.”Looking globally, we are just as committed to advancing human rights abroad – from Afghanistan to Ethiopia to Yemen,” she said. “Some countries – including some of you who are on this Council, or seek to be on the Security Council – believe human rights are optional. They are not.”

Without mentioning China or Russia, she said “any efforts to roll back human rights protections in the Security Council, including efforts to limit human rights monitoring and reporting, will be met with the strongest possible opposition from us.”

“This dangerous notion flies in the face of the self-binding principles that serve as the bedrock for the United Nations,” Thomas-Greenfield added.

More broadly, Ambassador Thomas-Greenfield said the world faces many other crises that should be tackled, including the economic crisis, the climate crisis and the coronavirus pandemic.

“The COVID-19 pandemic has spared no nation. It has stressed our global health systems, destabilized economies, and killed more than four million people around the world, including over 600,000 Americans. And, as we all know, the impacts go beyond the disease itself. Economies have suffered. Instability has spread. Gender-based violence has spiked. Millions of children, especially young girls, have been forced to stay home from school, and far too many may not return. More girls have been pressed into forced marriages, childhood pregnancies have increased, and a high percentage of HIV/AIDS among young girls has occurred. We need to stop this virus and we need to stop it now,” she said.

She described climate change as “a challenge for every person, in every nation, on every continent.”

“Which is why, at President Biden’s Summit on Climate, he advanced efforts to tackle the climate crisis. He announced our target to reduce emissions by 50 percent below the 2005 levels in 2030 and achieve a net-zero emissions by 2050,” she said. “Together, we need to do everything we can to keep the goal of 1.5-degree Celsius limit on global average temperature rise within reach. The impacts of climate change also pose a threat to peace and security. And at its current pace, the climate crisis is set to drive millions from their homes. And many of the world’s most fragile states and regions are the most vulnerable to climate calamities.”

Related Topics:says human rights are ‘not optional’U.S. formally backs appointment of former Nigerian President as special envoy for Horn of Africa amid Ethiopia’s Tigray crisis
Up Next