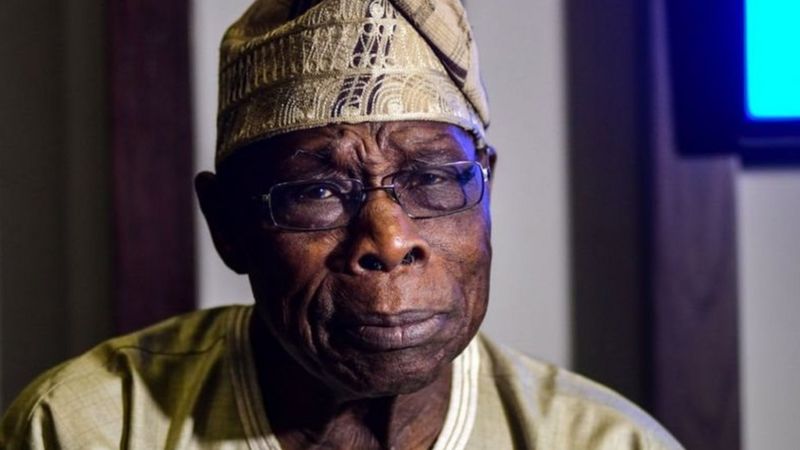 The United States is plesed with the appointment of former Nigerian President Olusegun Obasanjo as African Union high representative for the Horn of Africa amid Ethiopia crisis.

“Great to meet w/former Nigerian President @OluObasanjo1 following his appointment by the @_AfricanUnion as High Representative for the Horn of Africa. We agreed on the urgency of granting humanitarian access to all now in need because of the spiraling conflict in #Ethiopia,” USAID Administrator Samantha Power said in a tweet.

For months, the crisis in Ethiopia has continued to escalate and last week, the United States said no significant progress has been accomplished since July.

The United States asserted that the humanitarian, political and security situation in Ethiopia continues to deteriorate with no progress made on the ground in several months, warning that more civilians may die.

With the military confrontation escalating further and the Ethiopian government failing to respond positively to calls for negotiations, the lingering instability in the Horn of Africa is affecting millions of people.

The United States said on the ground are various actors that can help but whose actions continue to exacerbate the conflict and endanger the lives of people in Tigray, the northern part of the country which also shares a border with Eritrea.

The United States asserts that while the government of Prime Minister Abiy Ahmed Ali has not responded positively to proposals for negotiations and publicly called for the mobilization of militia, The Tigray People’s Liberation Front, or TPLF, has expanded its own military campaign into the Afar and Amhara regions. This, even as the Eritrean Defense Forces have re-entered Tigray.

“In our last session on Ethiopia and the situation in Tigray on July 2, the United States, Ireland, and the United Kingdom called for public discussion in the Security Council focused on protection of civilians. We called then for a negotiated ceasefire and unfettered humanitarian access, and we called, more broadly, for a national political dialogue that would be inclusive of all Ethiopians. Since then, no progress has been made on any of these fronts. None,” the United States Deputy Representative to the United Nations, Ambassador Richard Mills, told the United Nations Security Council on Thursday during a briefing on the situation in Ethiopia and the Tigray region.

“The Ethiopian government has not responded positively to proposals for negotiations. Instead, it has publicly called for the mobilization of militia. The TPLF, meanwhile, has expanded its own military campaign into the Afar and Amhara regions. Ongoing TPLF military operations in these regions are displacing hundreds of thousands of civilians. And this, too, must stop immediately,” Ambassador Mills said. “Eritrean Defense Forces have re-entered Tigray. And reports indicate that military alliances among armed groups in other regions risk sparking a wider war in Ethiopia.”

According to Ambassador Mills, “instead of striving to create space for negotiations and for dialogue, leaders on all sides have used inflammatory rhetoric that is increasing polarization along ethnic lines.”

“This is all gravely concerning to all of us. These developments are eroding the unity, the sovereignty, and the territorial integrity of the Ethiopian state,” he said, asserting that “the United States is particularly concerned by reports of ongoing violence in the Tigray region and other parts of northern Ethiopia, including attacks against women and children.”

Ambassador Mills called on the Ethiopian government and the TPLF, as well as associated regional militias, to “end the fighting now, allow humanitarian access, and move toward a negotiated ceasefire immediately and without preconditions.”

In addition, Eritrean Defense Forces “must refrain from further increasing or regionalizing the conflict.”

Ambassador Mills told the UN Security Council that the Biden administration is particularly concerned by the dire humanitarian situation on the ground, the need for immediate negotiations toward a sustainable ceasefire, and the withdrawal of Eritrean forces.

He said contrary to its public commitments, the Ethiopian government and regional authorities continue to cut off Tigray, with limited entry of humanitarian goods or personnel.

“This withholding of humanitarian aid, particularly food, is leading to unnecessary death and untold human suffering,” said Ambassador Mills. “Last week, after repeated warnings, aid agencies ran out of food stocks in their warehouses in Tigray. This comes after all of us were told over the last three months about famine conditions in Tigray. Millions are at high risk of food insecurity in northern Ethiopia, and of those, hundreds of thousands are estimated to be at risk of starvation in Tigray.”

He described the humanitarian workers who are being targeted and killed in Ethiopia while trying to “fend off this starvation” as heroes.

Despite a small increase in convoys and flights entering Tigray, we estimate that just seven percent of the needed humanitarian supplies were able to reach Tigray over the past month. And that statistic is based on the World Food Program’s projection of what is needed and the Ethiopian government’s own reporting on how many trucks have gotten through,” Mills said.

He added, “Let’s be clear: this shortage is not because food is unavailable. It is because the Ethiopian government is still limiting humanitarian aid and personnel, including land convoys and air access.”

He said the United States is “troubled by disturbing reports that the Ethiopian government is intentionally withholding humanitarian assistance to starving Ethiopians, and these impediments to the movement of humanitarian supplies must be removed immediately, and trucks must be allowed to enter and deliver lifesaving assistance to Tigray.”

“If these impediments continue, large numbers of people will starve to death and many more will die from disease,” Mills warned, recalling that in the Security Council Resolution 2417 passed in 2018, “the denial of humanitarian access and depriving civilians of objects indispensable to their survival is a violation of international humanitarian law and can constitute a war crime.”

“The impediment to the movement of humanitarian supplies is not the only humanitarian crisis in the country. We are also alarmed by reports of reprehensible attacks against Eritrean refugees,” Mills told the Security Council. “One humanitarian worker was killed by TPLF forces in Amhara region last week, and humanitarians have observed the looting of NGO offices and warehouses by the TPLF, with the supplies being taken into Tigray. This is utterly unacceptable. These humanitarians are there to save lives. They must be protected. The trajectory of this conflict of the last ten months demands continued Security Council action.”

Ambassador Mills also told the Security Council that the United States “remains deeply concerned about the role of Eritrea in fueling the ongoing crisis.”

“The presence of the Eritrean Defense Forces in Ethiopia remains a significant barrier to ceasefire negotiations and to political resolution of the conflict. The evidence is overwhelming that Eritrean Defense Forces engaged in a pattern of serious human rights abuse in Tigray,” he said, recalling that last week, the United States designated the EDF Chief of Staff Major General pursuant to Executive Order 13818, which builds upon and implements the Global Magnitsky Human Rights Accountability Act.

Ambassador Mills said it is the position of the United States that “to avoid additional measures from the United States, the EDF must immediately and permanently withdraw from northern Ethiopia.”

With humanitarian and security situation deteriorating on the ground, Mills asserted that negotiations for a ceasefire and political discussion on a way forward “must commence immediately.”

“Given this magnitude of unspeakable suffering, the Security Council has come together, and I think we are making clear to all parties to this conflict: There is no military solution,” he said, calling for all parties to the conflict “to halt offensives, come to the table without preconditions, and negotiate a lasting ceasefire.”

“Without the Ethiopian government and the Tigray People’s Liberation Front’s commitment to both unimpeded access and a negotiated ceasefire, the fighting will continue, more civilians will die,” Ambassador Mills added.

Related Topics:U.S. pleased with appointment of former Nigerian President Olusegun Obasanjo as African Union envoy for Horn of Africa amid Ethiopia crisis
Up Next