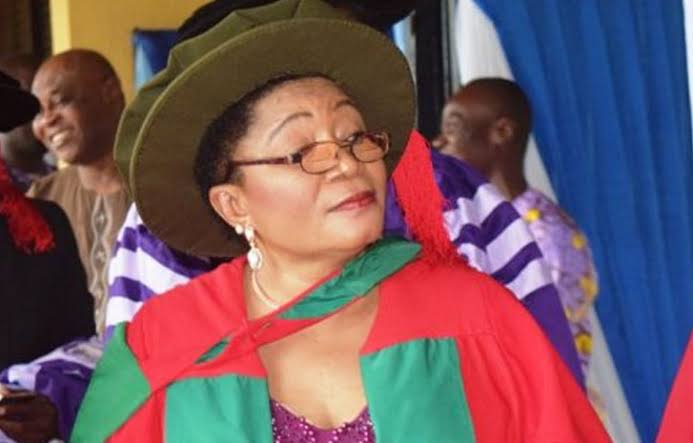 BENIN – Prof. Lillian Imuetinyan Salami, Vice Chancellor, University of Benin (UNI­BEN), was allegedly held hostage for several hours on Wednesday by angry students of the institution, who were said to have forced her to trek from her lodge to the university gate and rescind decisions on school closure and N20,000 late registration levy.

Reports have it that trouble start­ed when the university closed the stu­dents registration portal, three weeks after resumption and surcharged those who could not register, while the portal was opened with a late reg­istration fee of N10,000.

According to the report, the university management increased the surcharge from the initial N10,000 to N20,000, saying those who cannot pay within a specified time will lose their admission.

This drew a chain of re­actions as the students went into protest Tuesday in the two main campuses of the univer­sity at Ekhehuan and Ugbowo, blocking the major roads.

The protesting students even argued that the increment was coming just one week after their resumption, whereas late payment of school fees is supposed to commence in the 2nd semester and not the 1st semester.

They also noted that some 100 level students have not even been cleared, meaning that they will not be able to pay their school fees until after clearance.

According to a statement signed by the university Reg­istrar, Ademola Bobola, stu­dents were directed to leave the school premises on or before 12 noon on Wednesday, September 15.

The statement made avail­able to Daily Independent read in part: “After due consultation, and in the overall interest of the general students’ body, the vice-chancellor has, on behalf of Senate, approved the closure of the university with immedi­ate effect.

“This is based on security reports to avoid the students’ action being hijacked by hood­lums; and thereby prevent any form of breakdown of law and order within and outside the campuses of the university.

“Accordingly, all students are to vacate the hostels and the uni­versity premises not later than 12 noon on Wednesday 15th, September 2021.”

The students, however, de­fied the vacation order from the campuses and marched to the official lodge and practically abducted the vice chancellor.

Having seized her, the ram­paging students forced her on a tortuous journey from her offi­cial residence to the university’s main gate on the Benin-Lagos road, on foot.

Sandwiched among the sea of heads, the protesting stu­dents made several video recordings of the vice chancellor trekking the long distance.

When the train got to the Engineering Faculty, the visi­bly exhausted university boss pleaded that she should be al­lowed to complete the journey in a vehicle.

A Toyota Hilux was provid­ed for the remaining trip.

However, the students deflat­ed two of the four tyres of the vehicle.

According to a source on the campus, “At the end, the vice chancellor was not ac­corded the luxury of riding in the demobilised vehicle alone, as some of the students jumped into the vehicle with her to ensure that she did not escape”.

The source, who pleaded anonymity, disclosed that after much drilling, Prof. Salami was forced to enter into an agree­ment with the angry students by rescinding her decision on school closure and stepped down the N20,000 late registra­tion levy at the university gate before she was allowed to go.