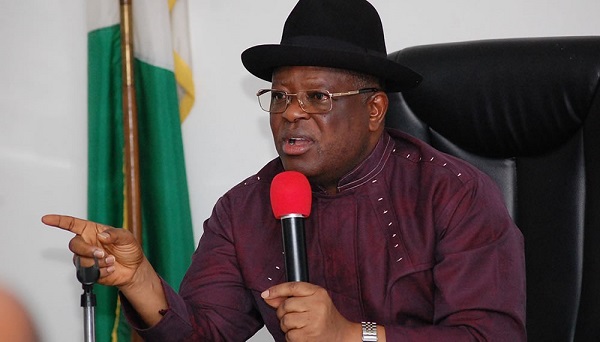 These are very interesting days in Nigeria, especially among the states over the value added tax (VAT) dust Governor Nyesom Wike raised through the court order he procured.

Wike is upbeat because his oil producing state has much to survive on from VAT accruable from oil. VAT is charged on goods and services and the oil works make Rivers buoyant enough.

But Lagos is stronger and yields about 50% of the internally generated revenues of all the 36 states put together. The simple lesson is that since Lagos has no oil but remains the behemoth from its mixed economy, oil is not all we need to be economically strong.

As the VAT war rages, the 17 Southern governors met in Enugu on Thursday, September 17 to agree that all states should be custodians of their VAT.

But my dear governor, Dave Umahi of Ebonyi State says no. Umahi said he is not part of the decision by the governors that states should retain their VATs. His reason is simple. Ebonyi is a poor state with clay feet too wonky to support her frame without crutches.

I may remind my governor that the issue has left the realm of what personal positions we take. It has scaled the first judicial hurdle that gives the initiator hope. If that holds all through as expected since the decision relied on existing statutes, then, our individual dispositions won’t count anymore. Whatever the court decides becomes the rule.

Without much ado, the strong states have gone into law-making frenzy to manage their VAT.

However, I have two points of disagreement with my governor’s position – I support financial restructuring of Nigeria and economic independence that detaches the states from the apron strings of Abuja where everyone runs to every end of the month with vessels to fetch free money and share. No. This should stop.

Secondly, no state or individual grows living on hand-out. It is the challenge of hardship and poverty that forces out the creativity in everybody. Most people who lost their paid jobs and had to work and fend for themselves at such times feel angry they didn’t start earlier to stand on their feet.

For the records, no state in Nigeria is poor. Even if there is any poor state, it is not Ebonyi.

Before Ebonyi came to be, that part of the Eastern Region wasn’t a wasteland. It was in the domain of the present Ebonyi that Nigeria and the east of about 10 states today relied on for cement production. In 1957, the regional government built the NigerCem, the largest cement factory in Nigeria then. That giant plant that meant everything any state would desire stopped production exactly 21 years ago this month. The question many ask is why has it been impossible for Ebonyi that is hard up to revive NigerCem at Nkalagu? The answer is because we believe free money will drop from Abuja at the end of the month. As it comes, we roll out the drums to burn it and relapse into our economic lethargy until another month ends. All states of Nigeria, including the oil-producing ones are guilty of this docility. That is why sometimes you hear them hold talks on economy beyond oil that ends as just discussion.

In July 2018, Governor Umahi raised our hopes about NigerCem when the Ibeto Group visited Abakaliki with foreign investors assuring of the revival of the cement plant. The projection from our dear governor was that the factory will roll out 6,000 metric tonnes of cement every day. That is enough to place Ebonyi on the road to self-sustenance. Would anybody believe that there is no single cement factory in Igbo land today? With all the craze for mansions, the entire Igbo population buys cement from outsiders.

The same laziness created the unthinkable irony that while people of the Southeast power the nation’s SME, the base and spine of any economy, the Igbo states are the least in IGR.

The annoying sleepiness of waiting for Abuja makes the coal seams of Enugu to lie waste. Enugu and/or the zone can form a business group, get experts and investors and take the licence to build coal power plant in Enugu and energise the zone forcing economic life to unfold. Forget about the hoopla on coal energy and pollution, no developed country has dropped coal power, unless they don’t have it. As at 2016, it was still 60% of power generation in China and up to 40% in U.S. What they actually do is improving and advancing the refining process towards zero pollution. Till now you read this, China still imports coal from North Korea to generate power.

My governor, no doubt has done well in road infrastructure, even though with some few excesses in some flyovers at Abakaliki, Abaomege and two inside Uburu, where one would have been adequate.

If only he starts thinking inwards about the salt lakes and tapping into their advanced benefits, the ecotourism potentials of the Edda Mountains, especially as he has helped build access roads through them, organizing the exploitation of the tens of solid minerals in a more beneficial manner to the state, then Ebonyi would be on top of the world.

The granite quarries of Akpoha, Ishiagu and Abakaliki still provide up to 80% of the supply to the Southeast. It is so huge that even Julius Berger is one of the companies in the mining. The proceeds make Ivo the highest IGR yielding LGA in Ebonyi.

In December 2000, President Olusegun Obasanjo visited Abakaliki and by coincidence I was there when the then governor, Sam Egwu asked the president to include the state in the oil-producing list because of proven oil finds in Edda in the 1920s. When Chief Martin Elechi was the CEO of the state, I am sure a firm was incorporated to invest in minerals extraction in the state with the intention to go into partnership with private investors.

In the days of yore when the Eastern Region government had the vision to grow local economy, Michael Okpara’s administration in the early 1960s built the mega Abakaliki rice mill, largest in the country. I once did a report that took me to that rice mill where I found that about 80% of the more than 120 milling machines were idle. The chairman said the young people were not attracted to farming because political touting gives them ready money. But the popularity of that ingenious creation still lingers as many rice-cultivating states still bring their produce to Abakaliki for milling. Soon, that will be lost as many are springing up in other states. Then, the same government of the region created palm plantations is present Ebonyi because the state isn’t a desert.

Today, our priorities shifted to easy money shared from Abuja. Dear Governor Umahi, that is what made Ebonyi poor when God didn’t.

So what do we do? Let’s look inwards, reinvent ourselves and bounce back. The state can create an annual economic symposium and investment expo to invite the world and lobby them to come. We owe ourselves the debt of creating the business environment now. Someone told me that when Egwu was the governor, a team of Igbo entrepreneurs in acting and production visited the state and asked for support to build a film city in Ebonyi. The idea ended as it came and here we are crying over self-made poverty.

Ebonyi is so rich not to cry over oil that has already spilled because this VAT free money regime is slipping into history. From VAT, more would come until money sharing dies totally.

The Southeast states should not annoy nature by being the ones to cry and reject economic independence, the hallmark of the people of the region, reason they still survive the vagaries of the denials in Nigeria.

Related Topics:VAT: Ebonyi governor misses the point
Up Next

Mohammed Bello-Koko, NPA and the parable of the Fruitful tree