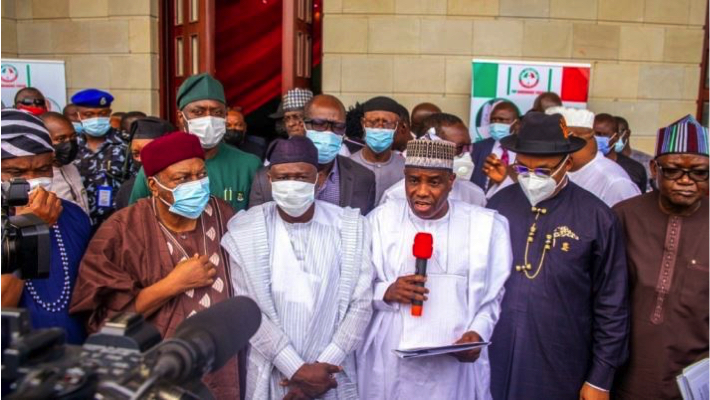 The governors met recently to discuss how to move the party forward ahead of the 2023 elections.

The Governors of the Peoples Democratic Party (PDP) say they are working together to present a unified force for the party in the 2023 general elections.

Chairman of PDP Governors Forum, Aminu Tambuwal of Sokoto State, disclosed this on Wednesday night while briefing newsmen after the governors meeting in Abuja.

Mr Tambuwal said that the closed door meeting on the party’s forthcoming national convention which started around 3:00 p.m., was very fruitful.

“We have been meeting since 3:00 p.m., meeting for about 7 hours. Very fruitful deliberation.

“You must have seen that we received leaders of our party in various other states where we don’t have governors.

“We had robust discussion with them on how to move the party forward, bringing all the leaders together, not only working towards a best national convention, but even beyond that.

“So that we can continue to sustain the goodwill that PDP is enjoying in Nigeria.

“And send the right signal to Nigerians that we are truly prepared and working together as a family to ensure that, by the grace of God, come 2023, we present a very united force that will rescue Nigeria from the mis-governance of APC,” he said.

“You will hear from the National Executive Committee (NEC) meeting tomorrow (Thursday) what the position is going to be,” Mr Tambuwal added.

The party’s NEC is scheduled to meet on Thursday to ratify the issues of zoning the party’s national elective positions ahead of the October 30 national convention.

The forum chairman said that the governors and the party leaders also discussed the PDP preparations for Anambra governorship election.

He said that the governors were united in working for the victory of Vincent Ozigbo, the party’s candidate in Anambra governorship election.

“We also had in our meeting, our candidate in Anambra governorship election, where we received briefing from him on how prepared our party is in Anambra, and to confirm to you and Nigerians that all of us are united in supporting our party in Anambra.

“By the grace of God we shall work assiduously towards winning the Anambra election,” he said.

Related Topics:We are strategising on party’s unityzoning ahead of 2023: PDP Governors
Up Next