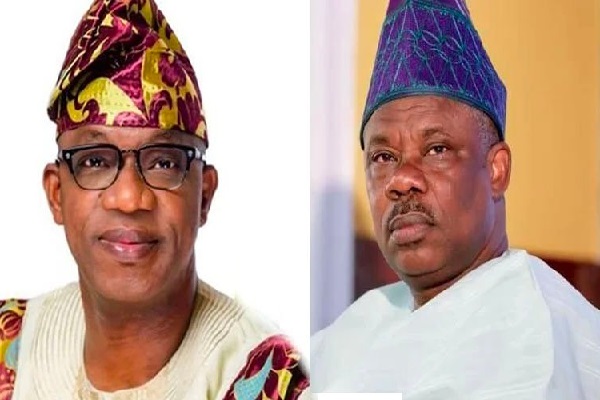 Supporters of Governor Dapo Abiodun and his predecessor Senator Ibikunle Amosun clashed on Saturday after which they held parallel Congresses for the All Progressives Congress (APC) in Ogun State.

The Governor’s camp elected Chief Yemi Sanusi as chairman at the exercise conducted at the MKO Abiola Stadium, Abeokuta by a seven – member committee led by Hon. Wale Ohu.

Sanusi was the immediate past caretaker committee chairman of the party in the State.

His sole challenger, Comrade Nuberu Olufemi, stepped down some minutes to the commencement of the exercise.

He was unanimously elected by 1,730 delegates from the 236 wards cutting across the 20 Local Governments in a consensus arrangement via voice affirmation.

Others who emerged from the camp include James Dina(Deputy chairman); Aderigbigbe Tella (Secretary) and Tunde Oladunjoye (Publicity Secretary).

They were sworn- in to pilot the affairs of Ogun APC for the next four years.

But the Amosun’s camp, which was initially chased away from the Ake Palace Ground in Abeokuta, later regrouped to elect Derin Adebiyi as factional chairman.

Security operatives had sealed up the venue earlier after a clash with supporters from the Governor’s camp, forcing the Alake of Egbaland , Oba Adedotun Gbadebo, to shift a chieftaincy title installation ceremony earlier scheduled for 1:pm in his palace to 2:pm on Saturday.

The opposing political thugs chased themselves with weapons and vandalised some vehicles parked by the roadsides.

There were staccato shootings as some of the hoodlums smashed bottles at the venue of the parallel Congress.

There has been fierce war by proxies between Governor Abiodun and Amosun over the soul of the APC in Ogun State.

But Adebiyi and other officers for the Amosun’s camp emerged through consensus via voice affirmation.

Addressing the APC members at the MKO Abiola Stadium at the conclusion of the Congress, Governor Dapo Abiodun described what took place at Ake palace arcade ground as a “show of shame.”

Abiodun threatened to deal decisively with any person, however highly placed, that wants to breach the peace of Ogun State.

“I’m the only Governor of the State today. For those still living in illusion of grandeur and being deluded, I hope the message is heard loud and clear,” Abiodun declared.