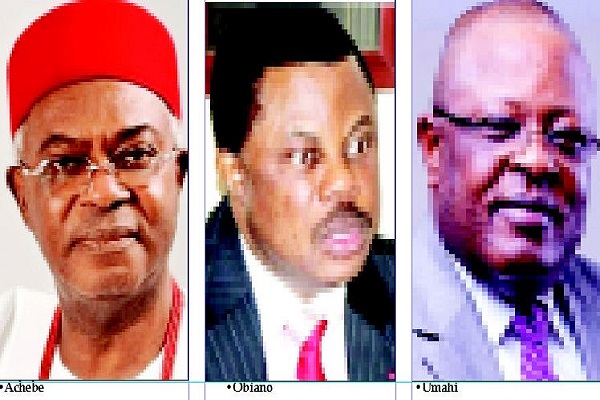 Traditional rulers in Anambra State, led by the Obi of Onitsha, Alfred Achebe, have warned the Attorney General of the federation and Minister of Justice, Abubarka Malami SAN, to leave Anambra State alone with his emergency rule threats

The monarchs in a communique after their meeting in Awka yesterday, said if the government cared a lot, what it should do is to send more troops to the state to take care of the security situation instead of threatening to impose emergency rule.

According to them, “If, indeed the statement credited to the Hon Attorney General and Minister of Justice is a fair summary of the FEC discussions and decision on Anambra State, it is our considered opinion that the FEC was not properly briefed on the state of affairs in the state.

“True, there have been considerable security challenges in Anambra State in the last two weeks. There have been about 12 casualties from the new wave of violence, including Dr. Chike Akunyili, a medical doctor based in Enugu and husband of the highly regarded former Director General of the National Agency for Food and Drugs Administration and Control (NAFDAC), Professor Dora Nkem Akunyili, OFR. Dr Akunyili lost his life on Tuesday, September 29, while returning from Onitsha where the memory of the legendary wife was honoured by the Onitsha branch of the University of Nigeria, Nsukka, Alumni Association.

“Yet, it cannot by any stretch of the imagination be justified to contemplate emergency rule in the state on the strength of the 12 violent deaths in the last two or three weeks. States like Zamfara, Kaduna, Yobe, Plateau, Niger, Benue, Katsina and Adamawa have lost thousands of people in recent times, yet successful elections have been held in them. The security crises in Niger and Borno have been such that mission aircraft were shut down there. Whole communities are occupied by bandits and terrorists.

“In contrast, life is normal in Anambra State. All schools, markets and business are open. A lot of petrol stations operate for 24 hours. People engage in regular social activities like marriages, funerals and title taking.

“Thousands of vehicles move from places like Onitsha to all parts of the country and beyond day and night without incidents. Political parties are still campaigning for the impending gubernatorial election, mobilising thousands of people to rallies.”

The monarchs noted that what the Federal Government has to do to improve the security situation in Anambra State, which for the last seven years has been the best throughout the country, is to deploy more security forces to the state, provide them with necessary equipment and give them incentives by paying the security personnel their allowances promptly and improving their general welfare.

“What is more, the Federal Government has to provide the security, the resources to engage in intelligence gathering.

“The Honorable Attorney General and Minister of Justice has to perish the thought of a state of emergency in Anambra State. The November 6 gubernatorial election has to hold.”

A total of 2,525,471 registered voters will be participating in the November 6 Anambra governorship election. The Nation gathered this from voters’ register released by the Independent National Electoral Commission (INEC).

INEC Chairman, Professor Mahmood Yakubu, in his remarks at an emergency meeting with political parties, disclosed that ”the number of valid registrants in Anambra State at the end of the First Quarter of the CVR exercise on 5th September 2021 is 77,475, noting that, “this figure has been added to the existing register of 2,447,996 eligible voters used for the 2019 General Election. Accordingly, the number of registered voters in Anambra State now stands at 2,525,471.”

Yakubu revealed further that 62,698 persons who are registered voters went ahead to register afresh but we’re fished out by the commission, “as a testimony to the effectiveness of our new system for checking double and multiple registrations, the commission found out that some 62,698 persons who are already registered voters in Anambra State went ahead to register again. These double or multiple registrations are invalid by law.”

According to him, “you may recall that before the end of the First Quarter of the CVR nationwide, we devolved the exercise to the Wards or Registration Areas in Anambra State. The end of registration was followed by the cleanup of the data to remove the names of ineligible registrants before the printing of the Permanent Voters’ Cards (PVCs).

“In Anambra State, a total of 138,802 citizens completed the registration, including applications for transfer and requests for replacement of lost, damaged or defaced PVCs as required by law. However, in the process of cleaning up the registration data, we discovered that many previously registered persons re-registered afresh.

“Consequently, the number of valid registrants in Anambra State at the end of the First Quarter of the CVR exercise on 5th September 2021 is 77,475. This figure has been added to the existing register of 2,447,996 eligible voters used for the 2019 General Election.

“I am glad to report that we have already completed 10 out of 14 activities in our Timetable and Schedule of Activities for the Governorship election. Only yesterday, we published the final list of candidates in our State and Local Government offices in Anambra State and simultaneously uploaded the same information to our website and social media platforms. Furthermore, all the 18 political parties participating in the election were issued a soft copy of the updated register of voters at a meeting held in our State Office in Awka.

“We are presently working on the printing of the PVCs. We shall use various channels, including e-mails and text messages, to contact the new voters to collect their PVCs before the election.

“We have almost completed the recruitment of ad hoc staff for the election. In all, about 26,000 election duty staff are required. Although there are still some minor shortfalls, we believe that we will complete the recruitment in time for their training scheduled to commence on 19th October 2021. The training of other categories of staff, such as Electoral Officers (EOs) and Assistant Electoral Officers (AEOs) has been completed, while the training of Supervisory Presiding Officers (SPOs) will commence soon”.

“The commission will continue to deploy appropriate technology to improve our electoral process. Let me once again reiterate the position of the commission that going forward, nobody will be allowed to vote in any election without successful biometric accreditation.

“I wish to appeal to all political parties and candidates not to exacerbate the feeling of insecurity in Anambra State through unguarded utterances and actions. This could compound the security situation and make the work of the Commission, political parties and security agencies even more difficult. It may also lead to voter apathy. This moment calls for statesmanship and maturity hence the decision to convene this emergency meeting. We are confident that the outcome of this engagement will be productive and helpful to the Commission and political parties as we continue to prepare for the Anambra Governorship holding on Saturday 6th November 2021”.

Chairman, South East Governors Forum and Governor of Ebonyi State, David Umahi, has debunked allegations that governors in the southeast are sponsoring killings in Anambra State.

The governor spoke in Abakaliki, the state capital during a prayer summit organised by the state government.

He was reacting to allegations by the Special Adviser on Political Matters to Governor Obiano, Ifeatu Obiokoye who said that Obiano did not attend the last Southeast Governors Forum meeting because he could not fathom sitting to discuss security with ‘certain individuals’ who were behind the violence plaguing his state.

Umahi admonished politicians to eschew partisan politics in attending to issues of security.

Mr Umahi urges the people of Ebonyi to provide information about the activities of the unknown gunmen adding that any information that would lead to arrest of any killer gunman would have a reward of Million.

He said: “The security of our state cannot be solved by partisan politics. No southeast governor is importing thugs to kill anybody in Anambra State.”

“I wish that the effect of the hard drug will clear from the person that said it. Abakaliki people were said to be the ones doing IPOB and killing people in Enugu and Anambra.

Umahi called on political parties in the country not to scheme out the zone in 2023 presidential race.

He said the region has sacrificed a lot and must be allowed to produce the next President of the country whether zoning or not zoning.

The governor called for integration of the zone in the affairs of the country.

He said the state believe in Nigeria which according to him must treat the Southeast fairly and equitable.

He said: “we will continue to say as a father of the state that we will not belong to Biafra, we will not.

“What is good for other states, is good for south east, it doesn’t matter whom God enthrones. Let the Southeast be properly integrated in the affairs of this nation. We are nation builders. We have investments in every part of this country and people use hate speeches to keep us down, people should not be afraid of us.

“We will work with the people for love and unity of this country. Give us a chance, treat us fairly for we have sacrificed. Even the states that are asking for VAT to collect, we have contributed a lot in building those states.”

A faction of the Ohanaeze Ndigbo Worldwide, has warned that the Anambra State governorship election may be stalled if the Federal Government fails to arraign the embattled leader of Indigenous People of Biafra, (IPOB) in court on October 21, 2021.

In a statement by Mazi Okechukwu Isiguzoro, the Secretary General of the Chidi Ibe led faction, the group said: “ If Federal Government fails to produce Nnamdi Kanu in court on 21st October 2021, subsequently, it will serve as reasons why Anambra elections might be marred with irregularities and violence. The practical steps to ensure peaceful Anambra guber elections, devoid of any kind of violence and chaotic uneasiness is for Federal Government to produce Nnamdi Kanu to face trials in court without further delay.

“We are ashamed to admit that some of the southeast governors are now spokesmen for the Presidential Villa. We are embarrassed by the way these governors grant interviews without any consideration of the negative impacts and consequences of their utterances to the public. These shows of shame must end instantly.”

He further said: “We are disgusted by the discovery through the governor of Anambra, Willie Obiano, that President Muhammadu Buhari is not in the know or approved of the Presidential threats to declare a state of emergency in Anambra. Our suspicion is reinforced by these findings, there are also the possibilities that President Buhari is not aware of the wavering in the arraignment of Nnamdi Kanu in court, and the office of Attorney General should dispute the facts that the office had not been hijacked for rogue operations against the southeast.”