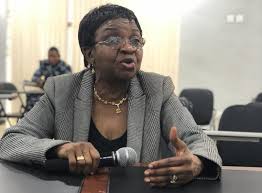 The Director General of the National Agency for Food Drug Administration and Control (NAFDAC), Prof. Mojisola Adeyeye has revealed that the agency is set to take delivery of some dictecting devices called true scan which is capable of dictating fake drugs circulating the country.

Adeyeye made the revelation on Thursday while defending the agency’s budget proposal for year 2022 before the House committee on Health Care Services.

According to her , Nigeria was the first country to purchase the device in the world and has so far purchased 40 of the device which cost 57 thousand dollars each US dollars.

“Another way of checking substandard drugs in the country is the use of detection device which FEC approved in December 2020. Each one of this device cost $57,000 dollars. Because of our prudence we were able to buy 40 that they are manufacturing as we speak. It is called TRUE SCAN”.

“NAFDAC was the first country (agency) in the world to use TRUE SCAN about 10years ago and we bought about 5 or 6 at that point. We now bought 40 which FEC has approved and are going to buy more.

The Director General also said that the agency was faced with challenges from cabals, she said that there are so many cabals that are into counterfieting of drugs in Nigeria adding that”we couldn’t overun these cabals”.

“Some cabals fight us in the course of our work and we are committed to putting an end to killing of Nigerians through fake products,” she said.

The Director-General who presented an estimate of N25.2 billion for the 2022 fiscal year expenditure and revenue projections of the agency including capital projects earmarked for execution.

In summary of the capital projects, the agency had earmarked, N2.9 billion is for buiding of state offices, N1.7bn for generators, N1.4 billion for laboratory equipments, N1.42 billon for motor vehicles, N666 million for infomation and communications technology and N78 million for furniture totalling N6.01 billion

Moreover, in 2022 budget, the agency had earmarked N6.78 billion for staff emoluments,N262 billion for equipments and N157.8 million for purchase of laptop computers and N40.1 million for the building of its Ebonyi state office.

Speaking also on the proposed amount budgeted for vehicles in the 2022 budget for the agency, Adeleke said that before now the agency had depended on other organizations vehicles to work.

“We did not have vehicles when I can in, vehicles is our life line 90percent of our work is field work and we can not effectively do them if their are no vehicles. All the vehicles we have purchased or proposing to purchase are been and will be tracked to avoid situation were the vehicles will be diverted for some thing else other than our work.

“In a case were an organization uses its cars to convey us for inspection, we can’t be fair in our judgement so the NAFDAC needs vehicles for inspection and many other duties”, she added.

NBA To Meet With Malami, Others Over Raid On Justice Odili’s Residence