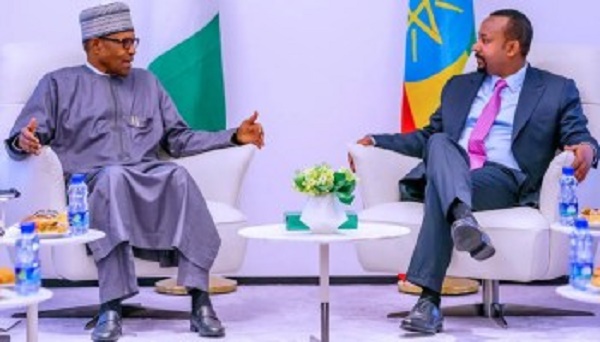 President Muhammadu Buhari has advised the warring factions in the Ethiopian national crisis to set aside their differences and work for the unity, progress and wellbeing of the country.

He spoke in Addis Ababa, the capital of Ethiopia, while giving his goodwill message during the inauguration ceremony of Prime Minister Abiy Ahmed for a second-five year term in office.

In a statement by his Special Adviser on Media and Publicity Mr. Femi Adesina, the President pledged that Nigeria would continue to support the unity and territorial integrity of Ethiopia.

‘’We are well aware of the many challenges facing the people of the Federal Democratic Republic of Ethiopia, and we encourage all parties to come together in the interest of the unity, progress and wellbeing of Ethiopia.

“Your Excellency, you therefore have a great opportunity to continue to work for the peace and stability of Ethiopia,’’ he said.

The President delivered his message in the presence of African leaders and a jubilant crowd of Ethiopians at the Meskel Square.

He told the prime minister that Nigeria, like many other countries, was counting on his leadership to unleash the great economic potentials of Ethiopia by expanding investment opportunities, deepening relations and building trust at home and abroad.

On the elections that brought the 2019 Nobel Peace Laureate back to power, President Buhari said: ‘’I commend the courage and commitment of the people of Ethiopia to the values and principles of democracy.

“I strongly believe that the outcome of the elections held in June is a reflection of the desire of the Ethiopian people for transformation, through a free, fair and credible electoral process.’’

President Buhari noted that Abiy’s victory at the election, clearly affirmed the confidence of the Ethiopian people in his leadership, courage and credentials, adding that it also underscored the years of his contributions to the development of Ethiopia’s modern democracy.

Wishing the Prime Minister a successful tenure in office, the President said he looked forward to more fruitful and robust engagements between the two countries.

The Presidents of Uganda, South Sudan, Djibouti, Senegal, Kenya, Somalia and the Prime Minister of the Democratic Republic of Congo attended the event.

Ahmed was sworn in for a new five-year term in office.

The swearing-in ceremony was held as part of the first day of the Ethiopian House of Peoples’ Representatives (HoPR)’s new five-year term.

He then was appointed by the HoPR and the lower house of the Ethiopian parliament as prime minister.

Following his appointment, Ahmed is expected to form a new cabinet, which will form the new federal government structure.

Ahmed was first appointed as the country’s prime minister in April 2018.

He had served the East African country at different high-level positions, including as minister of science and technology.

Ahmed’s Prosperity Party secured more than 400 out of 436 parliamentary electoral constituencies, according to the National Electoral Board of Ethiopia.