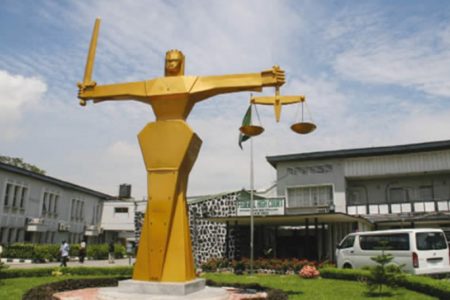 A Federal High Court sitting in Lagos has ordered forfeiture of the sum of N2.7 billion recovered from the bank account of a Lagos-registered firm, Spiralfoss Ltd, to the Lagos State Government.

Justice Ambrose Lewis Allagoa, who made the order, also ordered the forfeiture of a black bulletproof Audi car Model ABL W12 Quatro with registration number BDG529GJ, traced to Spiralfoss Ltd, to the Federal Government of Nigeria.

The forfeiture application was made by the Economic and Financial Crimes Commission (EFCC) through its counsel, Mr Rotimi Oyedepo.

On September 10, the EFCC secured an interim forfeiture order of the money and the car via an ex-parte application.

The anti-graft agency, which moved the application before Justice Tijani Ringim on September 10, 2021, told the court that the money was domiciled in Fidelity Bank Plc account number 5080102755.

Granting the prayer, Justice Ringim also directed the publication of the interim forfeiture order in any national newspaper for interested parties to appear before the court within 14 days, to show cause why the final order of forfeiture should not be made in favour of the Federal Government.

At the resumption of proceedings yesterday, Oyedepo canvassed EFCC’s argument that the car and its contents were believed to be the proceeds of criminal activities.

He prayed the court to order the forfeiture of both to the Federal Government.

Owonikoko contended that the money belongs to Lagos State.

While aligning himself with Owonikoko’s argument that the funds be released to Lagos State, Oyedepo prayed the court to forfeit the car to the Federal Government.

Justice Allagoa, in a bench ruling, granted the application and made the final forfeiture of the sum of N2.7 billion funds to the Lagos State Government and also forfeited the vehicle to the Federal Government of Nigeria.

“I have carefully perused the processes before me vis-a-vis the submissions of counsel. I agree that the appropriate order to make in these circumstances is that the funds should be forfeited to the Lagos State Government and the bulletproof car to be forfeited to the Federal Government of Nigeria as rightly agreed by both counsel.

“Consequently the application is granted as prayed,” Justice Allagoa held.

Related Topics:Bulletproof Car To FGCourt Orders Forfeiture Of Company’s N2.7b Cash To Lagos
Up Next