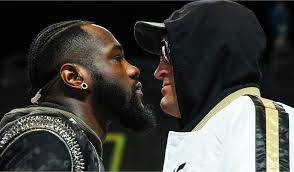 The costume designers said the red represents war, while the black represents a funeral.

“This costume is very special to Deontay,” the Sun UK quoted the designers as having said, adding, “He asked us to use red and black colours, which represent Wilder’s African roots. The red represents war, while the black represents a funeral.”

According to the designers, “This time around, we created a couture surprise element that is sure to make heads turn and honour Deontay’s African Edo tribe.”

They disclosed that the new costume is going to be significantly lighter than his legendary black mask costume that was blamed for his defeat at the hands of Mr Fury in 2020.

They said Mr Wilder had already tried on the costume to ensure that it doesn’t drain his energy reserves.

Mr Wilder’s costume choice comes a few months after he disclosed that he traced his roots to Edo State, Nigeria.

The bronze bomber who has never been to Nigeria, in a viral YouTube video, said he plans to visit Edo state to learn more about his roots. “Once I’m done with what I’m doing, I’m going back to see my tribe Edo,” Mr Wilder said.

“I want to see my culture and my ancestors and learn a lot of things. We all have lots of things that we are connected to that we know nothing about. I’ll love to go there and do research about my roots and my tribe,” he added.

Mr Fury had earlier vowed to knock out Wilder when they meet for the third time on Saturday in Las Vegas, with the Briton’s WBC heavyweight title on the line.

The undefeated Fury (30-0-1), who battled Wilder (42-1-1) to a draw in 2018 before taking the belt from the American, was tagged the aggressor at Wednesday’s news conference.

The heated back-and-forth repeatedly berating the former champion near the end of the event led organisers to call off a planned face-off for the cameras.

Related Topics:Deontay Wilder to face Tyson Fury in Edo-inspired costume
Up Next