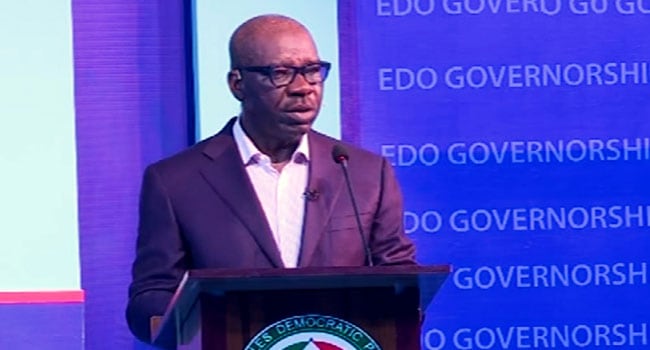 Governor Godwin Obaseki of Edo State has said the state government has concluded discussion with the Chief of Army Staff to retrieve possession of a landed property.

Tracknews Online reports that the property of a parcel of land is situated near Oregbeni Market, along Ikpoba Hill, in Benin City belonging to the Nigerian Army.

Obaseki had disclosed this while receiving the new Comptroller, Nigeria Immigration Service, Edo State Command, Rabi Garba, at the Government House, in Benin-City.

Obaseki said the state government will commence physical retrieval of the land soon.

He said: “In terms of land where you currently operate from, I spoke with the Army Chief of Staff when he visited last month. We have been assured that the Nigerian Army has formally relinquished the land. It is now for us to take physical possession of the property.

“The Chief of Staff will arrange a tripartite meeting between the Federal agencies occupying that property, the Brigade Commander and Edo State Government. So that we can commence the process of getting the Nigerian Army to vacate that land, giving the Federal agency the proper allocation, Certificate of Occupancy to expand their office.”

According to the Edo governor, his administration will get the issue of the land settled on time to enable the Immigration Service carryout their official function to the fullest.

Related Topics:Edo: Obaseki To Retrieve Property From Nigeria Army
Up Next