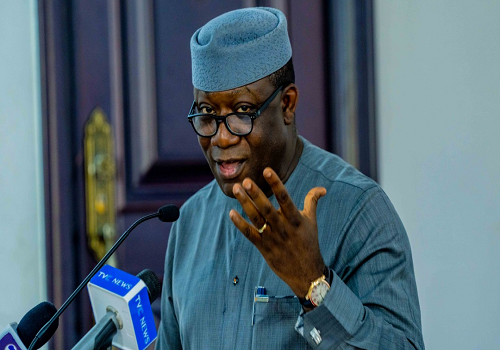 It’s needless restating the obvious that our beloved Ekiti State clocked a quarter of a century on October 1. That’s a milestone deserving of celebration and thanksgiving especially when cognizance is taken of the teething problems the newly created state had to endure before it could find its feet then.

Has Ekiti State arrived at its promised land or Eldorado in terms of physical and human capital developments? Not at all, but it’s safe to say that coming from where the state was in the past and where it is now, some progress is being made, even if it is marginal. Can more still be done at an accelerated pace? Definitely, but progress and development can only be achieved where there is unity, inclusion and collective-ness.

In any case, in the spirit of celebrating the milestone, one must salute the doggedness, courage and foresight of our illustrious sons and daughters whose sweat, foresight and unity led to the creation of the state on October 1, 1996, by the late military Head of State, General Sani Abacha. Their sterling contributions in the creation story are forever etched in our collective consciousness as a people and in the sands of time for posterity sake.

Going down the history lane, it is apposite to the crux of this intervention to state unequivocally that the agitation that led to the creation of Ekiti State known as the Fountain of Knowledge, among other compelling factors, sprung up from the inequities the old Ekiti people suffered in the hands of those in charge of the leadership of Old Ondo State. It was the feeling of marginalization and the experience of it that led the wise men who kick-started the creation movement to collaborate and unite for the worthy project.

Unfortunately, 25 years after the state was created, the inequities and injustice our forebears had in mind to banish when they struggled for the creation of Ekiti State are still with us today ably perpetrated and perpetuated by those who have had the privilege to serve the state at the highest level since the return of democracy to the country in 1999.

For reasons of convenience, ease of administration and a sense of inclusiveness, the state is politically delineated into three senatorial districts – Ekiti South, Ekiti Central and Ekiti North – just like other states of the federation.

Of the three districts, since 1999, only Ekiti South has not produced the governor of the state while the pendulum of gubernatorial power has been oscillating between Ekiti Central and Ekiti North as if those from Ekiti South are pariahs and outlaws in the same state their forebears struggled to create! No injustice could be more than this if the truth must be told.

As the struggle for who becomes the governor of the state in 2022 gathers momentum, it is imperative to emphasize that the only just political formula that should be adopted and used is to allow the governorship seat shift to Ekiti South whose constituents are becoming disillusioned and worried over the continuous neglect and deprivation the zone has been suffering through the years. In achieving this equity, the two dominant political parties – PDP and APC – in the state must be committed to picking their gubernatorial candidates from Ekiti South.

Interestingly, those who once benefitted from power shift before are the ones who are serving as formidable stumbling block to Ekiti South producing the next governor of the state. For those who don’t know, the emergence of Segun Oni and Fayemi in 2007 as the candidates of the PDP and the defunct Action Congress of Nigeria (ACN) was basically because of the imperativeness of power shift to Ekiti North then, the two previous governors – Niyi Adebayo and Ayodele Fayose, being from Ekiti Central.

From all indications, Fayemi, who is rounding off his second term in office, is already projecting someone from Ekiti Central as successor. Although he is yet to publicly announce or anoint the person, those who are in his inner caucus have been drumming support for the person while their foot soldiers within Ekiti social media ecosystem and beyond have been trying to shoot down the agitation for power shift to Ekiti South with all kinds of warped logic and specious arguments that are clearly against natural justice.

Ironically, Fayemi as a prominent member of the Southern Governors’ Forum has been canvassing a power shift from the North to the South in the forthcoming 2023 presidential election. It’s ironic because a man who does not believe in power shift at home is the one at the forefront of power rotation at the federal level. How so? Does it mean that what’s sauce for the goose is not sauce for the gander?

Also, it’s funny because the governor does not know that the people can see through his double-faced hypocrisy which is promoting some equitable political formula abroad while discouraging the same formula at home to satisfy his inordinate desire.

One would expect that a man of Fayemi’s pedigree as a former social crusader and political activist will ordinarily be the one championing the cause of Ekiti South people in the coming gubernatorial election in the state. But alas, the outgoing governor has become a typical Nigerian politician who likes to change the goal post when the rule does not favour him or his team.

One is tempted to ask: on what premise will Fayemi be anchoring his power rotation crusade to the south as 2023 approaches when he is the arrowhead of those who are against power shift to Ekiti South back home? Perhaps in the governor’s book charity no longer begins from home. It’s even quite pathetic when the governor’s unjust position is juxtaposed with his erstwhile bona fides of being a man known for justice, fairness, equity and inclusiveness. It is sadder still because he is a former beneficiary of power shift in the same state.

Come what may, as they say; conscience is an open wound and only the truth can heal it. The fact that Ekiti South has been denied the gubernatorial seat of Ekiti State since 1999 is an open wound that is festering to become sore at an alarming rate. The only truth that can heal it is to zone the seat to the zone in the forthcoming election. This is the only thing that can be done. And the earlier the PDP and APC are committed to it, the better for the body politic of the state.

Related Topics:Ekiti 2022: Antithesis of equity
Up Next

Gani Adams: 2022 Will Be A Difficult Year For Nigerians If Buhari Govt Fails To…,