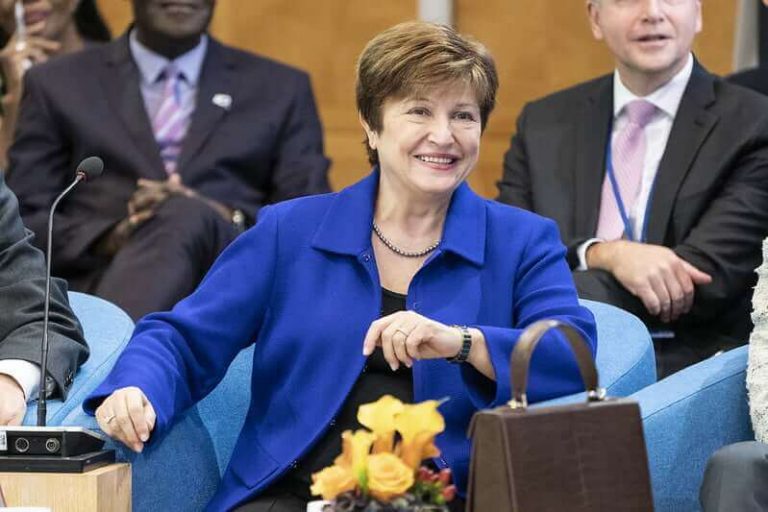 The embattled managing director of the International Monetary Fund (IMF) Kristalina Georgieva is fighting back, and on Wednesday she met with the IMF Board for the first time to address and refute accusations that she helped boost China’s ranking in a world economies report in 2018.

In a twelve-page statement to the IMF Executive Board, the Bulgarian economist, who had declined to speak publicly until she had the opportunity to meet with the Board and answer their questions, refuted all the allegations against her, asserting that she did nothing wrong.

“I am pleased that I finally had the opportunity to explain to the IMF Board my role in the Doing Business report and how I respected the integrity of the report,” Georgieba said in a statement released on Thursday by a public relations and reputation management firm handling her. “I look forward to an expeditious resolution of the matter in a way that preserves the core strengths of the IMF and the World Bank as strong multilateral institutions that fulfill their important missions during these times of unprecedented crisis.”

Ms. Georgieva’s counsel, Mr. Lanny Breuer, of Covington & Burling LLP, also released a letter to the Dean of the IMF Board, Mr. Aleksei Mozhin, detailing the fundamental procedural and substantive errors with the World Bank’s lawyers’ investigation and its conclusions.

In her prepared statement to the IMF Board on Wednesday, Georgieva asserted that “ the WilmerHale Report does not accurately characterize my actions with respect to Doing Business 2018, nor does it accurately portray my character or the way that I have conducted myself over a long professional career.”

“I want to thank you for the opportunity to appear before you today. I want to be clear from the very start of my remarks: the WilmerHale Report does not accurately characterize my actions with respect to Doing Business 2018, nor does it accurately portray my character or the way that I have conducted myself over a long professional career. I have dedicated my life to serving the public good,” Georgieva said. “Whether at the World Bank, the European Union, or the International Monetary Fund, I have always worked hard to protect and promote the institutions that I have had the privilege to serve and help lead. I believe in their goals and I have worked tirelessly to achieve them. Those who have worked with me over my career know me as someone who respects and follows the rules, encourages open dialogue, and seeks to reach the best decisions in the right way—collaboratively and in good faith. I have always asked my colleagues to do the same.”

She added, “I care deeply about due process being followed in all public institutions and in the importance of transparency by those who lead them. That is why I willingly agreed to be interviewed by the lawyers conducting the investigation into the Doing Business reports.

“I spoke candidly in my interview, which extended over two days, and I provided my best recollections at that time about events that had occurred nearly four years ago concerning my involvement in the Doing Business 2018 report and the workings of the World Bank at the most senior levels. I did not review any documents or refresh my memory before the interview as I was not asked to.

“The email from WilmerHale requesting my participation said clearly that I was not a subject of the investigation and assured me that my testimony was confidential and protected by World Bank Staff Rules, which guarantee due process. None of this proved to be true.

“I was never afforded an opportunity to review the notes taken during my interview for accuracy and to offer clarifications, which is particularly concerning as I was pressured to meet the lawyers at the end of very heavy workdays. I was not allowed to read and respond to references that directly relate to my actions in the Report before it was made final and publicly released. I was also not given an opportunity to present information regarding its conclusions or challenge the fact that some of my statements were ignored or taken out of context.”

Georgieva said regarding the Doing Business 2018 report, she had a limited role, consistent with her level of responsibility at the time as the CEO of the World Bank.

“I want to be clear: I had a very limited role, consistent with my level of responsibility. It is also important that my involvement is seen in the context of my other responsibilities as CEO of the World Bank at that time,” she said.

She added, “You all already have a good sense of the role of a CEO. Let me still describe in a few words what I was doing in the fall of 2017, nine months into my newly created position. As the CEO of the International Bank for Reconstruction and Development (IBRD) and International Development Association (IDA), I had 10 Vice Presidents reporting directly to me—6 Regional, 3 Global Practices, 1 Central Policy Unit (OPCS)—and the Sr. Director for Development Economics (DEC). In total, I was overseeing some 8,000 staff. I managed the overall functioning of the organization: its lending, policy compliance, and operational performance. My particular focus was on implementation of the first year of the largest IDA replenishment in its history. This was challenging as it was becoming clear that the structure of the Bank, dominated by very large “global practices”, was becoming less responsive to the client needs, and we needed to rebalance staff incentives towards the demand from the “regions”.”

The future of Georgieva has been uncertain since an investigation into manipulation of an annual World Bank report found that the bank’s former chief executive directed staff to inflate China data.

More specifically, Georgieva was called out by her previous employer, the World Bank, for allegedly applying pressure on staff to alter data to boost China’s position in a ranking economies.

The World Bank said in a review released in December that China’s position in the 2018 report (ease of doing business report), which was released in October 2017, should have been at number 85, seven places lower than number 78 which is where China ended up featuring.

But in her first statement on the accusations weeks ago, Georgieva denied any wrongdoing, saying she remained professional and that the conclusions

“Out of respect for due process, I have refrained from addressing many of the questions that have been raised about the 2018 Doing Business report at the World Bank and will continue to do so until I meet with the board of directors at the International Monetary Fund. It is important, however, to at least elaborate for the public and for the sake of the staff of the IMF why I disagree with the investigative report’s conclusions with respect to my role in the Doing Business 2018 report,” the Bulgarian economist wrote in a statement,” she wrote. “Let me be clear: the conclusions are wrong. I did not pressure anyone to alter any reports. There was absolutely no quid pro quo related to funding for the World Bank of any kind. Reviewing the integrity of these reports was within my professional responsibilities at that time, and, unlike what has been reported, I followed all protocols for editing the report. The methodology used in the Doing Business report has been the subject of concerns over many years. Like others in the World Bank before and since, I fundamentally viewed my role as overseeing the protection of the integrity of the report’s methodology, not its technical implementation.”