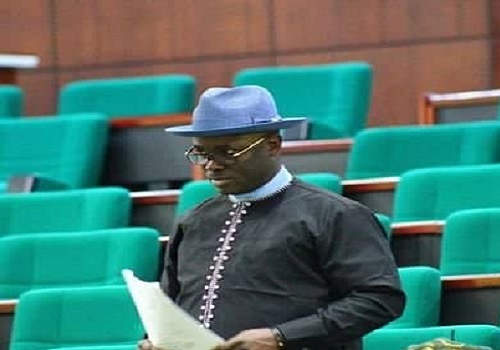 A member of House Representatives, Ben Igbakpa (PDP Delta) has recalled how Ghanaian security agents held him for four hours in the airport last weekend.

He said he was held on the account of President Muhammadu Buhari’s allegation that some members of the National Assembly were sponsors of terrorism.

He asked President Muhammadu Buhari to name and shame all those alleged to be sponsoring terrorism.

Coming under matter privilege at Tuesday’s plenary, Igbakpa narrated his ordeal in the hands of Ghanaian security over the President’s statement that some members of parliament were involved in the sponsorship of terrorism.

President Muhammadu Buhari had said during his broadcast during the nation’s 61st Independence Day celebration that some prominent Nigerians, including some members of the National Assembly were sponsoring terrorism.

The lawmaker said as a result of the President’s broadcast, he was held hostage at the Ghanaian airport for four hours by security agents who claimed they wanted to be sure he has not come to hide in their country.

He said: “As reported by media house across the world, President Buhari in his Independence Day speech, told the world that one of us is sponsoring terrorism. IPOB, by what it is to the face of the law today is a terrorist organization even when we have our reservations, because the laws of the land and courts have spoken.

“Mr Speaker, that means that 469 members of this National Assembly are prime suspects.

“On that fateful day, I went to Akure, to be part of the burial ceremony of our colleague, Hon. Adedayo Omolafe. On Saturday I had to honor an invitation in Ghana for a wedding. Mr Speaker, it will amaze you to know what I faced in the hands of Ghanaian officials.

“They detained me for about four hours, saying they are trying to confirm something. I stayed at the airport for four hours, missed the wedding I went for and at the end of the day, one of them walked up to me saying sorry sir there’s an announcement in Nigeria that a member of parliament is sponsoring terrorism.

“We have been put on red alert to ensure that no member of parliament comes here to hide or cause trouble. I had to come back home dejected.

“People have been calling me all over the world. My friends have been asking me, who among you is that person sponsoring terrorism.

“The right thing for a father to do is to name and shame any child that’s bringing about division. But Mr President didn’t shame that person or name them. Instead, he named 469 members because we’ve always cooperated and the fact that Nigeria has a lot to deal with

“I am making an appeal. The right thing to do is to invoke section 28 of the Constitution. They can tell us who among us is sponsoring terrorism.

“Right now, all of us here are prime suspects. I appeal that the leadership of the House should liaise with their counterparts in the Senate to try and see the President so that he can tell us who’s sponsoring terrorism amongst us.

“The President should also go ahead and prosecute and convict that person”.

Speaker Femi Gbajabiamila said the leadership has taken note of the request saying “Hon. Ben your privilege is noted and we will get back to you on that”.

Have Confidence In Nigeria, We Can Help You – Buhari Tells South Sudan