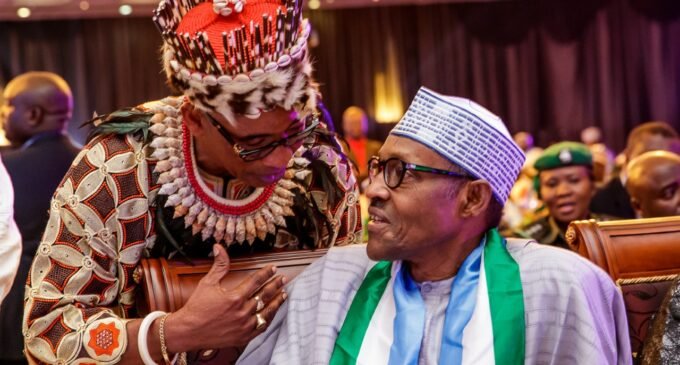 He said the president has done a lot for the south-east in the last six years, and as such, he would always be welcome in the zone.

The Enugu monarch spoke on Friday when he paid a courtesy visit to Femi Adesina, special adviser to the president on media and publicity, at the presidential villa.

The monarch highlighted the ongoing construction of the Second Niger Bridge, the new runway of the Enugu

International Airport and the Enugu-Port Harcourt expressway as part of the achievements of the president in the south-east.

“Look at the Second River Niger Bridge, which is going on at a frenetic pace. Enugu International Airport has a brand new runway and is now in use,” he was quoted as saying.

“The Enugu-Port Harcourt Expressway, Onitsha-Enugu road, and many others are also things to point at in the region.

“We thank President Buhari for all he has done for Nigeria in six years. It has not been easy due to many challenges, particularly security, but the good work continues.”

On the anti-corruption efforts of the Buhari administration, the monarch commended the president for his “admirable strides” since he assumed office, urging him not to relent.

Related Topics:Igbos Will Always Support You – Enugu Monach Tells President Buhari
Up Next