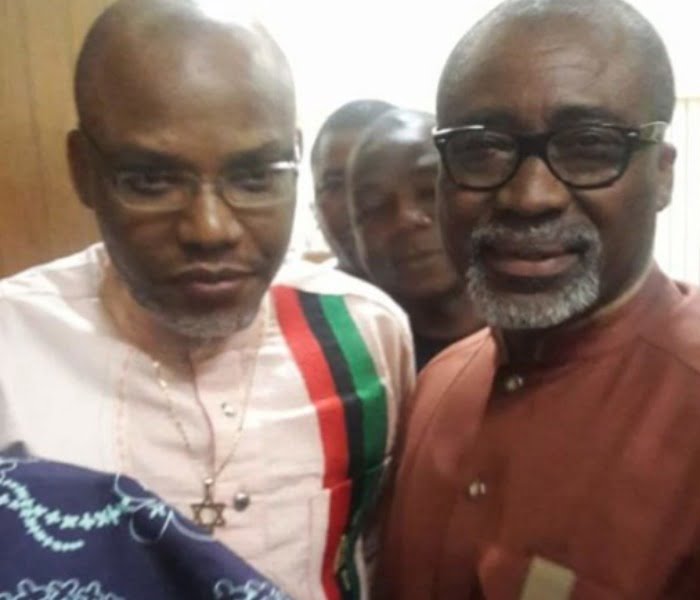 Senate Minority Leader, Senator Enyinnaya Abaribe, has stated that he does regret standing surety for the embattled leader of the Indigenous People of Biafra, IPOB, Nnamdi Kanu.

Naija News recall that Abaribe and two other individuals had in 2017 stood surety for Nnamdi Kanu before he was granted bail.

Kanu, who was rearrested in Kenya, is currently facing charges bordering on terrorism, treason, incitement and many others.

Speaking on Channels Television on Tuesday, Senator Abaribe (PDP-Abia South) called on the federal government to embrace dialogue and addresses the root causes of agitations, stressing that silencing agitators would not wipe out the ideology.

While insisting that he will always stand with his people, the former deputy governor blamed the media for tagging every activity in the southeast to IPOB.

He disclosed that aside IPOB and the Movement for the Actualisation of the Sovereign State of Biafra, there are more than 30 separatist organisations in the South-East zone of the country.

Abaribe said, “I am a supporter of the cries of our people against injustice…I stand with my people.

“One of the biggest problems that the media also has is that they tag everything IPOB in the South-East. You won’t believe that there are more than 30 different separatist organisations. IPOB, MASSOB, there are so many and each one of them come back to the same thing.

“Why we are having separatist agitations everywhere in the country is that some people are unable to manage our diversity.”

On Nnamdi Kanu, Abaribe said he does not regret his actions back in 2017.

“I will still stand surety because you feel that you are being unfairly treated,” he said.

Related Topics:IPOB: I Am Ready To Stand Surety For Nnamdi Kanu Again – Senator Abaribe
Up Next