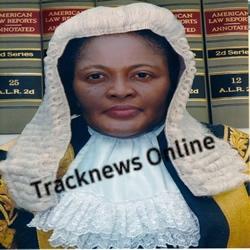 At least 50 operatives were said to have arrived at the senior jurist’s Abuja residence on Friday evening with immediate efforts to break in.

The operatives arrived at Mrs Odili’s Abuja residence on Friday evening with immediate efforts to break in, sources told TrackNews Online. The judge immediately and vehemently resisted the attempts to raid her residence by the operatives, saying she had no business with them.

“She told them to go and meet her husband because she does not have any matter pending before them,” our source said under anonymity because they did not get permission to comment on an ongoing operation. Armed police officers were also amongst over 50 operatives said to be part of the operation.

Peter Odili, the Supreme Court jurist’s husband and former Rivers governor, has been facing corruption charges raised by the EFCC. Earlier this week, a federal judge ordered the immediate return of his international passport, saying anti-graft prosecutors have failed to substantiate grounds for continuous seizure of the politician’s passport.

Officials could not immediately say whether or not the ongoing standoff at Mrs Odili’s residence was because of her husband’s case.

The development comes five years after operatives of the State Security Service broke into the residences of over a dozen federal judges, including three of the Supreme Court at the time. Some of the judges have since died, with their family members their health deteriorated following the raids.

Tracknews Online has called and sent messages to the EFCC for comments.