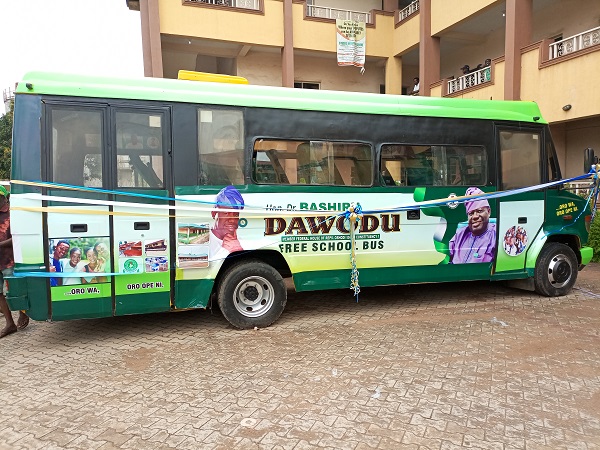 The lawmaker representing Oshodi/Isolo Federal Constituency 1 in the House of Representatives, Bashir Dawodu, has donated educational materials and a school bus to his constituents, to ease transportation problems.

Dawodu lamented that pupils’ lives were endangered when walking by the roadside, saying the bus would enhance their safety.

He said he had also completed the building of 40 classrooms across the local government.

“Education is the bedrock of development. The best legacy we can bequeath to our children is education. Realising this, I consider transportation a huge challenge to the learning process and this motivated me to provide this bus for pupils,” the lawmaker said.

The Chairman, House Committee on Basic Education and Services in the House of Representatives, Prof. Julius Ihonvbere, hailed the lawmaker for his contributions to education.

He praised Lagos State for being different in education, with innovations and development.

The Chairman, Lagos State Universal Basic Education Board (SUBEB), Wahab Olawale Alawiye–King, thanked the legislator for his contributions to educational development in the state.

Education Commissioner Folashade Adefisayo said Dawodu was complementing what the state government was doing in education.

His Information and Strategy counterpart Gbenga Omotoso said education is the greatest gift anyone can acquire.

“Governor Babajide Sanwo-Olu has instructed the SUBEB chairman that children in Lagos should not be left behind and that every child must be in school. Teachers in the state are trained daily and pupils are ready to return to school due to the conducive learning environment,” he added.

The Elewu of Ewu Kingdom, Oba Shakiru Kuti, admonished parents to send their children to school, saying they should advise them on the importance of education.

The Chairman, Oshodi/Isolo Local Government, Kehinde Almaroof, called for synergy among the stakeholders, to move the local government forward.

Speaking with The Nation, the Headmaster of Morning Bell Primary School, Bakare Amos, appreciated the lawmaker for the donations.