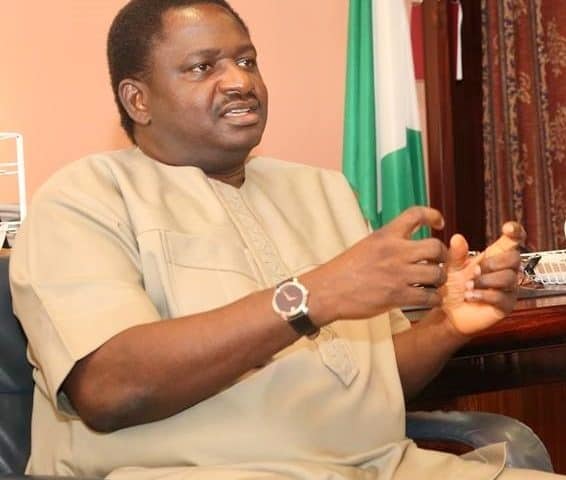 Jamiu Isiaka is alleged to have committed fraud against a South Korean national identifying himself as the presidential spokesperson to carry out the dubious act.

Tracknews Online understands that the middle-aged man was arraigned before the court by the Ilorin Zonal Command of the Economic and Financial Crimes Commission on June 14, 2019.

It was read during the court sitting that Isiaka having pretended to be a spokesperson to the nations’ president, also convinced the unsuspecting victim that he was a former Group Managing Director of the Nigerian National Petroleum Corporation late Maikanti Baru.

Tracknews Online understands that the convict defrauded the South Korean man identified as Keun Sig Kim to the tune of N30m. Isiaka had collected huge sums of money under the pretence of securing for his victim an NNPC approved marketing form and license certificate to buy crude oil in Nigeria.

The EFCC arraigned the defendant on four counts, to which he pleaded not guilty. However, after shreds of evidence have proved the Nigerian citizen committed the crimes he was accused of, Justice Mahmud Abdulgafar of the High Court on Thursday, held that Isiaka is guilty of the charges and sentenced him to seven years in prison on each count, to run concurrently.

The judge ordered the forfeiture to the Federal Government of some properties recovered from the convict, which were proceeds of his unlawful activities.

In addition, the court also ordered restitution to the victim of the crime.

Before his conviction, Isiaka had told the court that he used the money to conduct sacrifice for the petitioner. He claimed that part of the money was used to buy a vulture, elephant skin, elephant intestine, the skull of a lion and liver of a gorilla; all used as ingredients for the sacrifice.

In the course of the trial, counsel to the EFCC, O. B. Akinsola, called two witnesses, including a Police detective, Dare Folarin, who narrated how the defendant was arrested and several fraudulent funds traced to his bank accounts.

The prosecutor tendered evidence on how the defendant obtained the sum of $88,521 from his victim, under the guise of helping him to procure an approval form from the NNPC.

He said that the offence was contrary to section 1(1)(a) of the Advance Fee Fraud and other Fraud Related Offences Act, 2006.