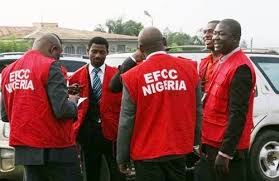 The spokesperson for the commission, Wilson Uwujaren, in a statement in Abuja on Friday, said one of the suspects was caught with 68 blank Guaranty Trust Bank ATM Cards.

Other items recovered from the suspect, according to Mr Uwujaren, included mobile phones, a Lexus IS350 Salon car with registration number BWR 977 BR.

Mr Uwujaren said it was discovered in the course of executing a search warrant that “one of the suspects is into ATM Card scam as two more blank ATM cards were recovered.”

He said the NDLEA and SSS handed over the suspects “along with the recovered items including written statements recorded at the office of the NDLEA.”

A staff of a new generation bank at Rangers Avenue Enugu, whose conversation with the suspect was intercepted by the EFCC, was said to have been arrested.

He added that the suspects were arrested at a luxurious apartment in an estate in Enugu.

“They are suspected to be apprentices learning the craft of cyber fraud. They will be charged to court as soon as the investigation is concluded,” Mr Uwujaren added.

Related Topics:NDLEASSS hand over suspected internet fraudsters to EFCC in Enugu
Up Next