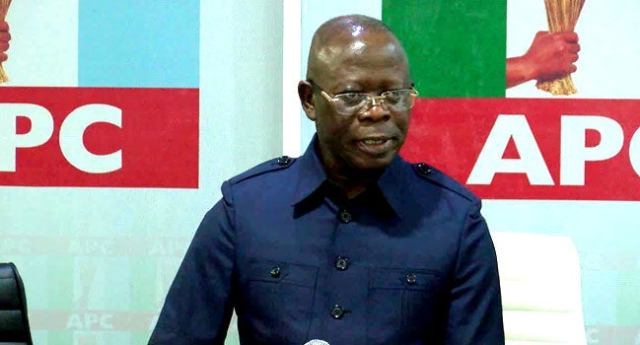 A former Governor of Edo State, Adams Oshiomhole, has stated that it is dangerous to reduce governance in the country to gender and age.

The Former National Chairman of the All Progressives Congress gave this warning while speaking at the public presentation of a book titled, ‘Politics that works’, written by Babafemi Ojudu and Alex James.

Oshiomhole noted that he has met with elder people who have good hearts towards the betterment of the country and the same goes for the younger generation.

He dispelled asking younger generation not to run for political offices in the country.

He said, “It is very dangerous to reduce governance and issues of government in Nigeria to age, and even the question of gender.

“When we are talking about the gender issue, what drives a woman is not the skirt or blouse that she wears, it is our heart.

“I want us to move our heart away from what we hear that when the people are young, things will be fine. The Vice President and I served on a committee before I was brought to where I am.

“Did we find any correlation between the values, the ideal, competence and performance of people who occupied executive positions and those who occupied legislative houses?

“The views they parroted, the decisions they took, and their idea of society; was it in correlation with their age and those views? I haven’t found any.

“I have found elderly people who care and believe Nigeria can do better and they have an idea of how it can be managed. I also have young people who believe life is a superhighway.

“I don’t want to be misunderstood. The young people have the right to participate and to be active in every sphere of life.”

Related Topics:AgeOshiomhole Warns Against Reducing Governance To Gender
Up Next

No going back on Anambra guber election – INEC