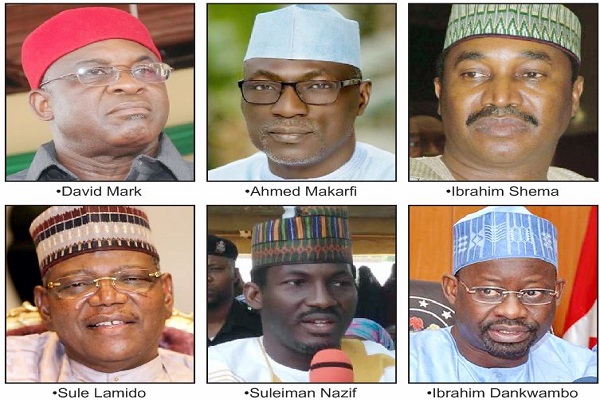 The zoning crisis in the Peoples Democratic Party (PDP) is yet to abate despite the ceding of the office of national chairman to the North.

PDP governors and leaders in the North have become sharply divided on how to micro-zone the offices allocated to the North based on the formula released by Governor Ifeanyi Ugwuanyi Zoning Committee.

The chairman of the party’s Board of Trustees (BoT), Senator Walid Jibrin, on Thursday cautioned stakeholders against taking sides in the controversy surrounding the zoning of party offices.

Attempts on Thursday night to cede the national chairman slot to North-Central were rejected by Northern PDP governors and leaders in a tension-soaked meeting in Abuja.

The camps of former Vice President Atiku Abubakar and former President of the Senate, Dr. Bukola Saraki, opposed the micro-zoning of the national chairman to North-Central.

They insisted on the office being thrown open to all the three geo-political zones in the North, including the North-Central, the North-West and the North-East.

The two camps of the leading presidential aspirants were said to be “uncomfortable” with the candidacy of ex-President of the Senate, Senator David Mark.

Following the stalemate on micro-zoning in the North on Thursday night, the Northern PDP caucus meeting decided to set up a 20-man search and screening committee.

The panel, headed by Governor Ahmadu Umaru Fintiri, is to recommend three best candidates to the National Executive Committee of PDP to pick its next national chairman from.

A member each of the panel was nominated from the 19 states and the Federal Capital Territory.

But the office of the national chairman has ignited fresh crisis in the Northern PDP caucus.

A top source, who spoke in confidence, said: “At the meeting on Thursday night, there was a serious division on the micro-zoning of the national chairman to the North-Central.

“Some governors and leaders insisted that the office be thrown open to all the three geopolitical zones in the North.

“They queried the rationale behind ceding the office to only the North-Central, saying that all the zones in the North are entitled to aspire to it.

“The situation became compounded when some stakeholders in North-Central were opposed to the micro-zoning of the office to their zone.

“For those in Atiku and Saraki’s camps, they felt the micro-zoning of the office to North-Central might undermine their presidential aspiration. So, their supporters rejected concession to North-Central. We bowed to their superior arguments to give peace a chance.

“They claimed that the Ugwuanyi Committee was not specific on which of the three geopolitical zones in the North should produce the next chairman of PDP.”

A former governor, who spoke with our correspondent, said: “To douse the tension at the Northern PDP caucus session on Thursday night, we opted for fairness and equity by raising a 20-man committee, headed by Governor Ahmadu Umaru Fintiri, to search and screen the candidates interested in becoming PDP national chairman.

“The panel, comprising representatives from the 19 states in the North and the FCT, will recommend three best candidates whose names will be forwarded to the National Executive Committee (NEC) for a consensus choice ahead of the party’s National Convention.

“The committee will also recommend micro-zoning formula for other offices in a manner that all the three geopolitical zones and states in the North will get a fair deal.”

It was gathered that with the development, the race is open for ex-President of the Senate, Chief David Mark, ex-governors Ahmed Makarfi, Ibrahim Shema, Sule Lamido and Babangida Aliyu. Also in the race, according to a source close to the screening committee, are former Gombe State governor Ibrahim Dankwabo, former Kogi State governor Ibrahim Idris and a serving Deputy National Chairman (North), Suleiman Nazif.

Although a former President of the Senate, Dr. Iyorchia Ayu and a former Minister of Information, Prof. Jerry Gana were said to be on the search list, the horse-trading was still in progress last night.

Of the candidates, the Southern PDP governors and leaders have endorsed Mark, who they think can preserve the unity of the party.

“I can tell you that the battle is between Mark and others. We are waiting for the report of the 20-man committee,” a NEC member said.

The chairman, Board of Trustees (BoT) of the PDP, Senator Walid Jibrin, has however cautioned stakeholders against taking sides in the ongoing controversy over zoning of party offices.

Jibrin, who spoke in Abuja on Thursday on the sidelines of the PDP National Executive Committee (NEC) meeting, urged members of the BoT to remain neutral in the zoning controversy.

There are two categories of BoT members prescribed by the PDP constitution. There are life members among which are all past Presidents, former Vice Presidents, past Senate Presidents and their deputies, all past national secretaries of the PDP, all past governors and all former chairmen who are alive.

Past and serving chairmen and secretaries of the BoT are also live members.

Some PDP chieftains of northern extraction, including some governors who have been eying the party’s presidential ticket, have kicked against the zoning arrangement which they considered inimical to their presidential aspiration.

Apparently worried by the heat generated by the zoning arrangement, the BoT chair, who got a vote of confidence at Thursday’s NEC meeting, called on party chieftains to put the interest of the party above their personal ambitions.

Stating that the PDP has yet to zone its presidential, vice presidential, Senate and House of Reps positions, Jibrin urged stakeholders not to heat up the process for personal gains.

He said: “What I can say is that we should never be personal, because when you want to be personal, the issue of disunity will come.

“We are not talking about zoning of the offices of the President, Vice President, Senate President or Speaker of the House of Representatives yet.

“Zoning can mar of destroy our party. But by the grace of God, we will not allow that to happen.”

He called on members who may be aggrieved by decisions taken by NEC on the zoning of party offices to explore existing conflict resolution channels in the party rather than take their grievances to the public place.

Jibrin implored aggrieved members not to consider defection as an option, saying that what the PDP is currently experiencing is normal in any democratic setting.

“I plead with stakeholders and our members across the country not to yield to the temptation to defect to any other party.

“What we are experiencing in PDP today is a child’s play compared to the implosion waiting to happen in the All Progressives Congress (APC).

“So please I urge you not to defect to the APC on account of what we are experiencing in PDP at present, because we are going to sort out our differences amicably the way we have always done in the past.”

Related Topics:leaders split over slotPDP chair: Northern governors
Up Next