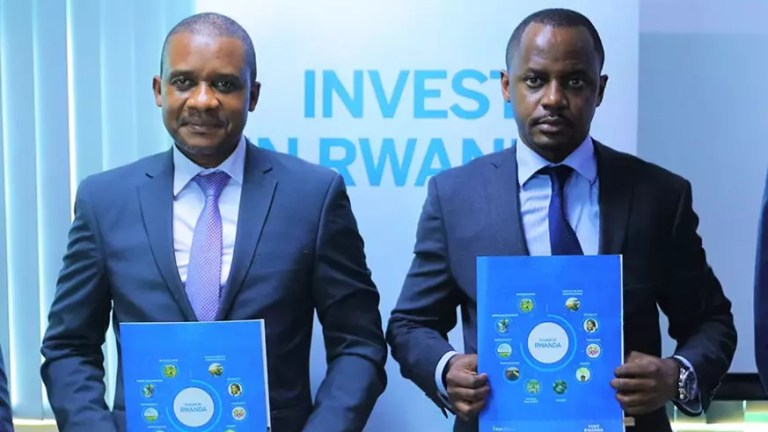 The two African countries, Rwanda and Mozambique have signed an agreement that will boost their economic development through trade and investment activities.

The two countries through their respective institutions in charge of development, the Rwanda Development Board (RDB) and APIEX of Mozambique signed a Memorandum of Understanding (MoU) on October 6.

Deputy Chief Executive at RDB Zephanie Niyonkuru disclosed that the signed MoU is expected to facilitate private sectors to implement different investment projects in both countries.

Few of the highlighted potential fields of interest include Agriculture and Agro-processing, infrastructure, energy, and tourism among others.

He also said that Mozambique being a country that has direct access to an ocean and borders five countries, for instance, is an opportunity for industrial companies to explore such factors in terms of products and larger market.

On his part, Director General at APIEX, Gil Bires said that beyond excellent diplomatic relations, they want to extend it to other fields especially business and trade in general.

“In the agriculture sector, we can bring our investors to establish partnership here, producing for export, remember that we are part of SADC (South Africa Development Community) and those who want to invest in Mozambique must have a regional perspective,” he said.

Adding that Rwandan investors can explore business opportunities that are available and enjoy incentives provided to foreign direct investment.

“According to our legislation, we treat all investors equally. It means that the guarantees and incentives that we provide to local investors are also available to foreign investors,” said Bires.

Niyonkuru also pointed out the plans of the government to ease the means of transportation between the two countries, he said that they are in discussions with RwandAir to have a direct flight to Mozambique to facilitate transport and logistics concerns for investors.

“We believe that once we have an airline that will be flying between Kigali and Maputo or any other city in Mozambique, that’s going to leap the trade in terms of having direct flights,” he said.

Currently, people who want to go to Mozambique have to pass through Johannesburg or Addis Ababa.

Bires said that despite the insurgency in the northern part of the country, the rest of the region is conducive for investments.

“Those that will come to invest in Mozambique will benefit from the legal framework that we have for foreign direct investment. It’s a safe country and a safe market,” he said.

In the past two weeks, President Paul Kagame had a working visit in Mozambique where he tasked the Rwandan deployed forces to continue rebuilding and protecting the country.

Rwanda deployed around 1000 troops and police in Cabo Delgado Province in north-eastern Mozambique, which in collaboration with Mozambican Armed Defence Forces (FADM), have succeeded in liberating several key towns from terrorist groups.

Related Topics:Mozambique Sign MoU on Trade and Investment PactRwanda
Up Next