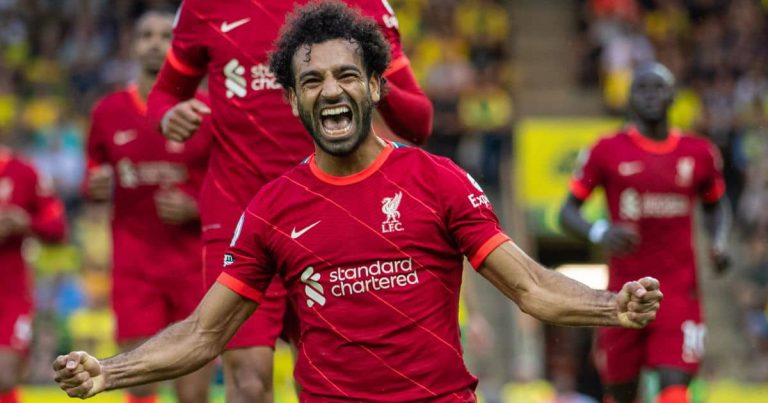 Liverpool talisman Mohamed Salah made sure to hail two teammates for their part in the Watford demolition, and revealed how their slow start against Manchester City sparked today’s result.

The Reds wasted little time in turning Claudio Ranieri’s return to Premier League management into a nightmare. Hitting their stride from the off, Liverpool quickly took control and never eased off in a thoroughly convincing 5-0 thumping.

Reminiscent of previous years, all three of Sadio Mane, Salah and Roberto Firmino were on the scoresheet.

Salah dazzled and danced his way through Watford’s defence to bag another goal of the season contender following on from his wonder solo goal against Manchester City last time out.

Speaking to BT Sport after the match, Salah made sure to congratulate his fellow forwards after initially saying: “I think we didn’t want to start like the City game so we talked in dressing room about starting the game well and that’s what we did.

“All the goals were very important but Bobby (Firmino) did a great job scoring a hat-trick so congratulations to him and Sadio also scored a nice goal.”

When asked about his mesmerising solo goal and where it ranked among his best efforts, Salah replied: “I didn’t watch back it yet. Last game (against Man City) maybe (was better). I don’t know which one was better.

“I was in the box trying to find someone or score myself. It is all about the team. that is the most important thing.”

Salah is operating at a goal a game after a hefty sample size of 10 matches across all competitions this year.

Asked if he’s in the best form of his life, the Egyptian forward added: “I don’t know. Sometimes I don’t have the luck to score goals but I am always trying 100% to help the team.

“I am confident at the moment, helping the team win points which is the most important thing.”

When asked if Salah was the best in the business right now, Klopp said: “His performance was massive today.

“The pass for the first goal was great and the second goal was special. He is top. We all see it. Who is better than him?

“We don’t have to talk about what Messi and Ronaldo have done for world football and their dominance. But right now, he is the best.”