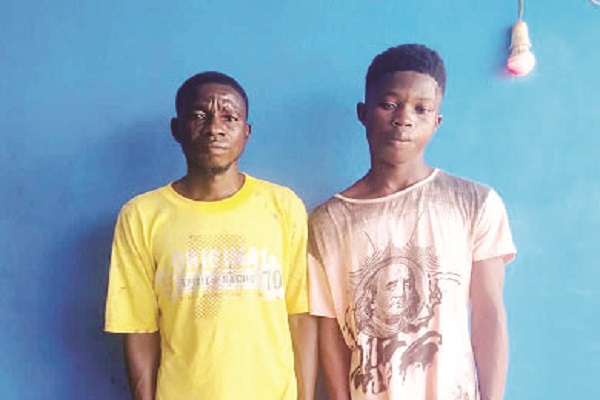 Two men who allegedly abducted a boy in Ogun have been arrested at a location where they were to pick up the ransom cash.

It was learnt that the victim identified as Daniel Ajibili, 7, was kidnapped about 11.20am on Sunday when the hoodlums grabbed him and called his parents asking for a million naira in ransom.

The incident happened in the Agbara area of the state.

The boy’s father Stephen Ajibili reported the incident to police who moved in and apprehended the suspects, Muhammed Abubakar, 42, and Clinton Niche,18, at a location chosen by the suspects.

Abimbola said the efforts of the detectives paid off when the suspects directed the victim’s parents to drop the ransom money at an agreed location.

The area was encircled and the suspects apprehended when they showed up to collect the money.

The suspects then led the detectives to a bush where the boy was tied to a tree and set free some hours later that day.

Abimbola said the suspects confessed to the commission of the crime.

“The acting commissioner of police, DCP Abiodun Alamutu, has directed that the fleeing members of the gang be hunted down and brought to justice in the shortest possible time,” Abimbola stated.

Related Topics:Suspected kidnappers held at ransom collection point
Up Next

My Father Defiled Me Claiming To Be Teaching Me – Victim