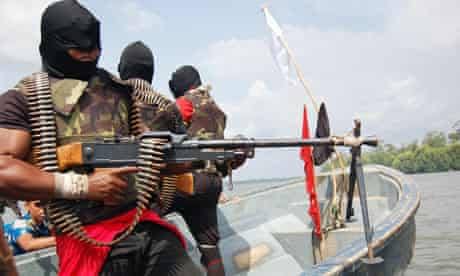 TENSION was heightened in the creeks in Delta State, weekend, when a group of peacekeepers, mainly ex-militants, engaged a notorious militant leader, sea pirate and kidnap kingpin, popularly known as MK and his gang allegedly terrorising Edo and Delta states in a heavy shootout that lasted several hours on Abigboro River in Warri South-West Local Government Area of Delta State.

It was learned the militant leader and his boys beat a retreat after the shootout on Friday night, but there was apprehension in surrounding communities that the clash would continue.

The creek dragons reportedly working for government were instructed to invade the hideout of the militant leader and stop his rampaging attacks and kidnap activities.

Commissioner of Police, Delta State, Muhammed Ali, could not be reached, yesterday, for comments and did not respond to SMS to his phone by this reporter.

However, Senior Special Assistant, SSA, Security Matters, to the Governor of Delta State, Daniel Ezekiel, said: “In the confrontation that happened two nights ago (Friday) MK suffered a heavy casualty as one of his speed boats was seized in the battle and taken away to Oporoza.

“For MK to know that this time around it is not going to be business as usual, the two entrance points to the creek where he and his criminal gang are hiding have been blocked by creek dragons monitoring when and how they will move out.

“I want to use this medium to say thank you to security agencies and creek dragons for taking the battle to this notorious kidnapper.

“I call on the Chief of Army staff to establish a military base at their known hub in Edo State, which the criminal elements take as a safe haven,” he added.

Related Topics:militants clash in Delta creekTension as ex-militants
Up Next