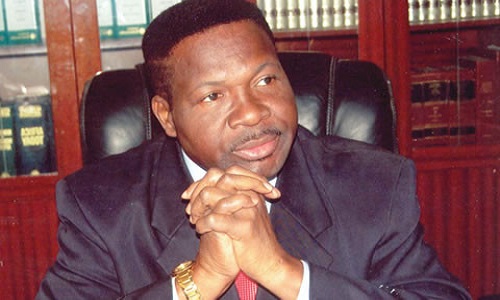 Amidst the uncertainty and confusion that greeted the news of the invasion of the Abuja residence of a Supreme Court Justice by security operatives, the action has been getting condemnation from various quarters.

It will be recalled that TrackNews Online reported on Friday that a joint team of security operatives invaded the Maitama, Abuja residence of Justice Mary Odili.

Odili is said to be on the watchlist of the Economic and Financial Crimes Commission (EFCC).

The security operatives, who were made up of soldiers and officers of the Nigeria Police Force (NPF), were identified as members of a Joint Task Force.

The security operatives, who came with a search warrant, said they received information on “illegal activities” going on in the house.

Initially, some sections of the media reported that the raid was carried out by operatives of the Economic and Financial Crimes Commission (EFCC) but the anti-graft agency, in a statement by its spokesperson, Peter Afunanya has quickly denied responsibility for the attack.

As at the time of filing this report, no official statement has been issued by any of the security agencies to claim responsibility for the invasion.

But addressing journalists at the house on Friday, lawyer to Odili, Mike Ozekhome condemned the invasion of his client’s home by security forces.

He noted that the warrant upon which the search was based had fundamental errors as it didn’t contain a name and the address on it was also different from that of his client.

He said the operatives missed the point badly by this unguided action, further suggesting that the search and invasion may be politically motivated to embarrass the judge or her husband.

“It is a fundamental flaw. A search warrant must have the name of the person that you want to carry out a search on his or her house,” he said.

“For that reason alone, they missed the point badly.

“If one wants to give them the benefit of doubt, one can say it was a genuine mistake which was why they quietly withdrew, contrary to the information circulating that justice Odili resisted search.

“On the other hand, it might be politically motivated to embarrass the justice of the supreme court and to embarrass her husband.”