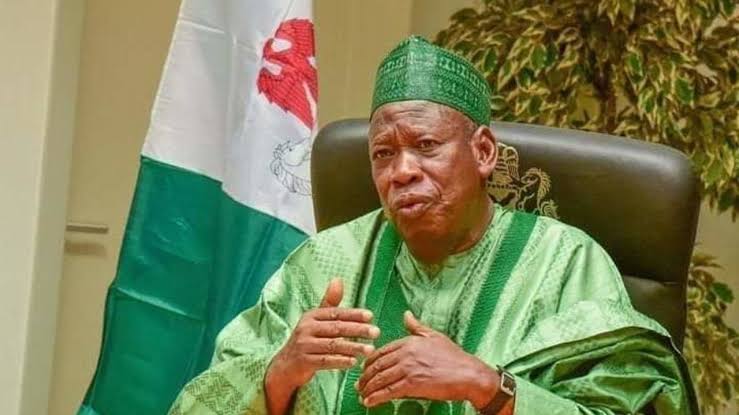 Governor Abdullahi Ganduje of Kano State on Friday tasked his Ekiti State counterpart, Kayode Fayemi, to convene a meeting of the Nigerian Governors Forum where states’ chief executives would apologise to one another.

Tracknews Online reports that Governor Fayemi chairs the Nigerian Governors Forum (NGF). The Kano Governor spoke at the Sani Abacha Stadium, Kofar Mata, in the state capital during the Independence Day celebration in the state.

Ganduje, who urged the 36 governors to work together rather than taking regional positions that would not benefit the future of democracy in Nigeria, warned them against making contrary and uncomplimentary remarks against one another.

He insisted that the recent public exchanges and counter statements between southern and northern governors were unfortunate and utterly uncalled for.

His words, “A situation whereby governors from one region will make uncomplimentary remarks to governors from the other side of the country, is not a civilised way of dealing with issues at hand.

“Some of those issues raised are political parties issues, that can be resolved by our various parties. I also understand that, this issue of present political dichotomy is that of power shift.”

Ganduje urged Fayemi to encourage the Governors to strive hard for the unity of the country, saying, “Governor Fayemi should call all governors for a meeting and urge us to apologise to each other. We should leave this matter to our political parties.”

He added that, “It has been a tradition in the country to have zoning. Which is a strategy by political parties. Each party has its own strategy to win elections. And in each of such strategies the Constitution is not affected.”

While urging that such issues should be left to various political parties to deal with, he pleaded that, “This dichotomy will not take us anywhere, so long as we want stay together as one indivisible and united Nigeria”.

Related Topics:Why Nigerian Governors Should Apologize To One Another – Ganduje
Up Next