■ Reveal how they help their boyfriends transport weapons, ammunition in public transport
From Molly kilete, Abuja 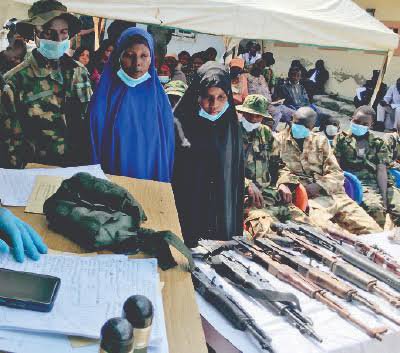 Two friends: Aisha Ibrahim and Hafsat Adamu, have revealed how they fell in love with some kidnappers and were helping them to transport their arms and ammunition to their locations without being detected by security agents on the highways.

The women who belong to an 11-man kidnap gang who have been terrorizing residents of Kaduna State and its environs were arrested by men of the Special Tactical Squad (STS) recently.

Aisha, 30, and Hafsat, 24, play strategic roles for the gang members by transporting arms and ammunition to specified locations using public vehicles without being detected by the security agents at the motor parks and on the highways.

On how they operate, the two ladies carefully dismantle the weapons which are mostly AK 47 riffles, and pack them neatly in their travelling bags and boxes, ccovering them with baby clothes and other items as they board the vehicle.

They said when they get to the security checkpoints, they are able to scale through because the security personnel who are mostly men do not usually search them as Muslim women.

Aisha said that she has been dating her boyfriend whom she met through one of her brothers through the telephone about one year ago, disclosing that she started the business of transporting weapons for the group barely six months before they were arrested by the police.

Before their arrest, Aisha, a divorcee and mother of three, said that she had transported about three guns and an uncountable numbers of ammunition. On the other hand, Hafsat said that she had only helped her boyfriend to transport guns once before she got arrested by the police through the same boyfriend.

The suspect who were paraded by the Force Public Relations Officer, Frank Mba, in Abuja, said that they got to know the kidnappers through matchmaking by of the guys in the community where they live.

Though they said they knew the young men were engaged in criminal activities, they said they went ahead to date them and become their gang members because of the money they were showering on them.

According to Aisha, she gets between N8,000 to N10,000 for every successful delivery, while Hafsat on her part said she got only N5,000, when she transported the gun to her boyfriend.

In this interview with Aisha, she said:

“My name is Aisha ibrahim, I am 30 years old. I met my boyfriend Babangida, through one of his friends who gave him my telephone number. We actually met at a wedding ceremony and we started dating. I love him because he gives me money and I know that he is a kidnapper. I started transporting weapons for him about four months after we started dating. I did that without being detected by the policemen and soldiers on the road. Before embarking on the journey, my boyfriend usually brings the weapon to my house and help me dismantle it then I will pack it in either my travelling bags or box and cover them with clothes and other items that will not attract attention from security operatives. I usually go to the motor park to board a vehicle and there too they don’t search me that is how I have been helping my boyfriend to transport weapons before I was arrested.

“I was arrested after the same friend who match-make us called and said he wanted to see me and I told him where I was at Maraba in Kaduna and the next thing I saw him with policemen that was how I was arrested and brought here.

“I was married and have three children, but my husband has divorced me, so I am single. I left the marriage because I was no longer in love with him, he beats me all the time and I did not enjoy the marriage. I was married for 15 years.”

Also Hafsat said: “My name is Hafsat, 24. I met my boyfriend Suleiman in the village at Kaduna after somebody introduced us through the telephone and we started dating. I know he is a criminal, but I dated him because I wanted him to marry me. We have only dated for three months and I actually didn’t know what he asked me to take for him to Kaduna was a gun because he only called me while at home to help him bring something for him and when I got to the park somebody brought the guns to me. It was while on the road that I called him to know the items in my luggage was a gun and some ammunition. I took the guns from Lafia to Gwagwalada and handed over to him and he gave me N5,000. I went back to the village where I was until one of his friends called me and before I knew what was happening he came with the police that was how I was arrested.”

Related Topics:Why we fell in love with kidnappers –Aisha and Hafsat
Up Next