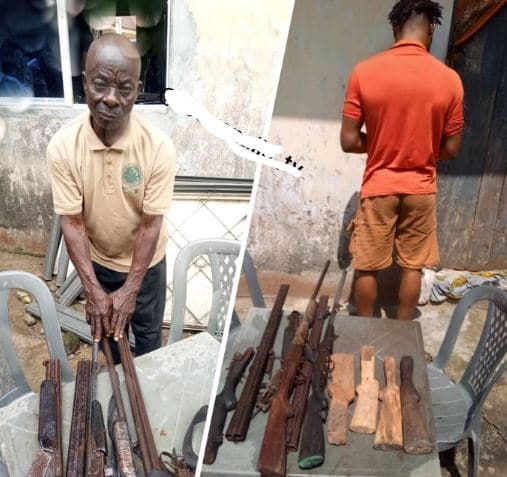 Emma Ighodalo, 28, a robbery suspect and an indigene of Irri village in Isoko South in Delta State has led policemen to the hideout of a 77-year-old suspected gunrunner, Michael Enipozi.

Tracknews Online reports that security operatives from Ozoro swung into action after receiving a distress call that three armed robbers were operating at the premises of a man (name withheld) along Ozoro/Ughelli road.

According to the Delta State Police Spokesperson, DSP Bright Edafe, the robbery suspect arrested with a live cartridge after his gang members escaped, confessed to have thrown away his gun into the bush while trying to escape from the combined team of policemen and vigilantes mobilized to the scene.

He also confessed that he bought the gun from the septuagenarian gunrunner for N30,000 and led policemen to his hideout from where three double-barrel guns, two single barrel guns, and tools used in manufacturing guns were recovered from him.

Upon interrogation, it was gathered that the septuagenarian is a welder that manufactures guns for criminals and has been in the business for over twenty years. He also admitted selling the gun to the robbery suspect.

Related Topics:77-Year-Old Gunrunner Arrested After Suspect ‘Fingers’ His Involvement In Robbery Operation
Up Next