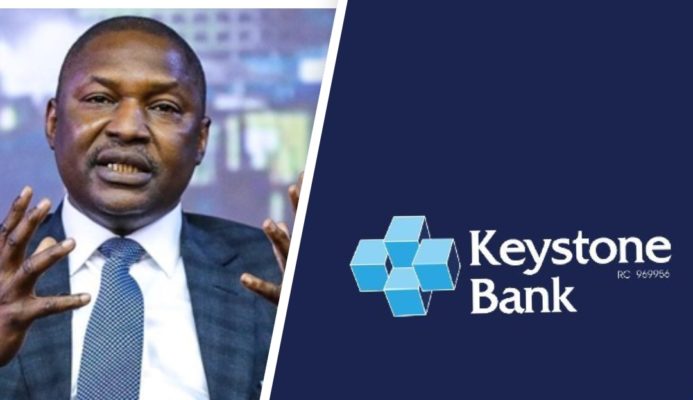 Federal lawmakers are investigating public assets recovered by federal agencies between 2002 and 2020.

Attorney-General of the Federation, Abubakar Malami, issued a directive that a part of the $136 million belonging to the Nigeria National Petroleum Corporation (NNPC) should be paid in naira equivalent, Keystone Bank has said.

The bank made this revelation during a hearing of the Ad-hoc Committee on Assessment and Status of all recovered loots, Movable and Immovable Assets, covering loots and assets from 2002 to 2020 by agencies of the federal government.

“Out of this entire amount, we paid $96 million in United States dollars and we paid the equivalent of $40 million in naira,” according to Lawal Ahmed.

Mr Ahmed, who is the Executive Director, North and Public Sector Directorate, Keystone Bank, also said that Mr Malami recommended the exchange rate at N305 to a dollar.

“That was the directive by the Attorney-General at the rate of N305 to a dollar,” Mr Ahmed noted, although it is unclear when the transactions were carried out.

When the chairman of the committee, Adejoro Adeogun, queried why funds meant for Brass LNG Investment account was remitted in a different account, Mr Ahmed stated that the bank had remitted all funds belonging to the NNPC.

“We were paying into the Brass LNG’s NNPC account in the TSA and at the time the Attorney-General gave the directive, he instructed that the funds be credited to the FGN Assets Recovery Account,” the bank official said.

Mr Adeogun, while presenting a document to Mr Ahmed, explained that the figures in the transactions differ from the one obtained from the Central Bank of Nigeria.

“There were two accounts: Brass LNG and OML 40. At the time this (AGF) letter was written, I believe that we had not concluded payment yet. The final payments were made thereafter in tranches,” Mr Ahmed added.

Reacting, a member of the committee, Olanrewaju Edun, criticised Mr Malami for issuing such directives, suggesting that the AGF be subjected to questioning.

“This is Nigeria’s money owned by the three tiers of government. We can take you up on that.

“Mr Chairman, I believe that my constituency has been robbed of money. Yes. And we need to contest that letter.

“I don’t know why the Attorney-General had to issue a letter that something that was transacted in dollars should be paid in naira rate when you have differential rates in Nigeria,” he added.

Related Topics:AGF Malami forced us to convert $40 million recovered loot at N305 per dollar: Keystone Bank
Up Next