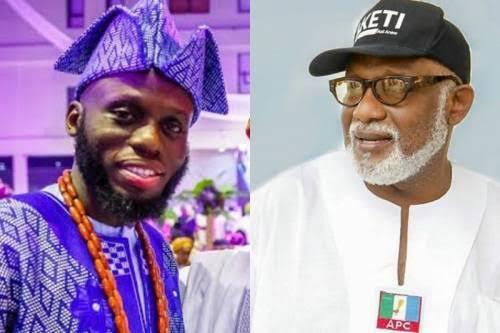 The recent appointment of Babajide Akeredolu, a biological son of Ondo State Governor, Rotimi Akeredolu, SAN as the Director General of Performance and Project Implementation Monitoring Unit (PPMIU) is a flagrant abuse of office and affront on the people of Ondo State.

The name Babajide Akeredolu became known in Ondo state when the State’s funds were used to procure a marriage for him in Colorado, USA, after the same marriage was consummated in Owo, his father’s birthplace. He has since assumed authority as part of the triad of the reign of father, wife and son.

The appointment as DG of PPMIU for Babajide, a young man who carries on as though, he was the person voted for as Governor is part of the grand design to finally empty the treasury of the State before Akeredolu returns to Ibadan.

Last year, Babajide pocketed a princely N433m as Consultancy fee on N4.3b on the “secret account” with Zenith Bank for more than ten years. Up till this moment, the Ondo State Government under Akeredolu has neither accounted for the money, nor the ten years accrued interest. Rather, it was Babajide who addressed a press conference, referring to Ondo State House of Assembly members as ” making un-necessary noise” over money he discovered. Babajide’s conduct is reminiscent of the ignoble actions of Commodus, son and heir apparent of Roman Emperor Marcus Aurelius, who at age 12, upon finding out that his bath water was not sufficiently heated, ordered the servant to be thrown into the furnace.

25% of all the Internally generated revenue in the State goes into the account of Canadian Systems Development Company (CSDC) under one Akin Oladimeji as MD. CSDC is an Ibadan based company that was brought to Ondo State by Babajide. The company was given office accommodation in the Governor’s office. They do not pay rents, neither do they pay taxes to the Government. Every month, 15% of the over N2b that is collected as IGR goes into Babajide’s personal account and the balance is wired to Lagos and Ibadan for the Consultant.

Only last week, Babajide was reported to have brought another Consultant to take charge of forestry operations in the State.

It thus appears that Mr Governor and his immediate family are bent on living fat on the lean resources of the people, when poverty has taken over the land, walking in all four legs.

There is no further proof of Akeredolu’s insensitivity to the plight of the people, when within two years of tenure, he organized three lavish weddings for his children, all in foreign lands- In Mauritius, Canada and Colorado, USA. Each of these weddings were bankrolled with Ondo State’s funds. Officials of the State Government, family members and friends were in these countries to celebrate with Akeredolu and family. Yet, this level of opulence and wasteful life style only started when he became Governor.

Mrs. Betty Akeredolu, wife of the Governor, has her own draining pipe also connected to the state treasury. She use
BRECAN, an advocacy group for breast cancer and Forum for Wives of Ondo State Officials ( FOWOSO) and female political appointees. Whereas, in the past, wives of governors put smiles on the faces of women through HANDEF and Gbebiro, women and political appointees now contribute money for Governor’s wife through all kinds of under hand tactics and blackmail. Mrs Akeredolu has bought up every buyable property in choice places in Owerri.

As the grand commander of the gang, Akeredolu himself within six months of his assumption of office bought four properties in GRA, Owo and renamed the street, Maranatha. Mouth watering offers were made to others with properties on the street, whether they are willing to sell to Mr Governor. This is apart from the more than 150 hectres of land acquired from farmers in Igbe quarters, Owo Local Government Area.

It is very apparent that, it is the greed of the first family that is being fed, no longer their needs. Akeredolu, his wife and children must appreciate that, the resources they are wasting in this reckless manner was only given to them in trust for the people. They should remember that, the day of reckoning is very near.

This series will continue shortly.

Related Topics:AKEREDOLU'S MISRULE IN ONDO STATE (2): GOVERNMENT OF THE FATHERTHE WIFE AND THE SON.
Up Next

MALARIA VACCINE: A DOSE OF HOPE FOR NIGERIA

EDITORIAL: CONCRETE ROAD IS NOT A DISEASE