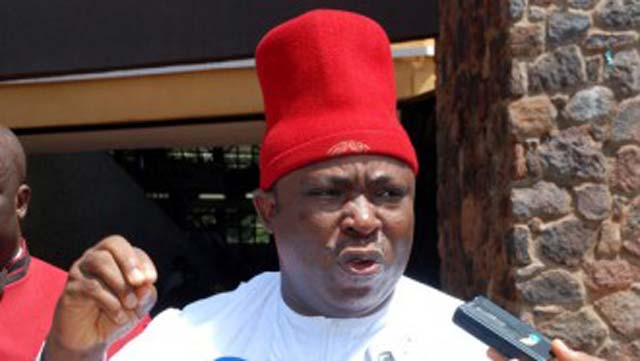 Umeh said the people of Anambra State have openly chosen the leader they want based on the outcome of the November 6 election which produced Charles Soludo of APGA.

The APGA chieftain further chided Umeh over his threat to challenge the election result in court by telling the APC candidate that ‘Anambra is not Imo’ where a candidate who came fourth at the polls eventually became the State Governor through a court order.

He mocked Uba, reminding him that he didn’t win any of the 21 local government areas in the state, hence his claim of a ‘stolen’ mandate is not sensible.

Umeh made the comments on Sunday while speaking with journalists in Anambra.

“The election took place in all the 21 local government areas in the state and he didn’t win any council area, so what is he going to court for,” he said.

“The outcome of the election was a true reflection of what Anambra people want. The Anambra people didn’t give Andy Uba any mandate. They wanted Soludo, and they voted for him massively.

“We are used to such cases. I have been in Politics for more than 20-years now, so APGA is not afraid of going to Court with Andy Uba. Nothing will make Anambra people to vote for a party that has nothing to offer.

“Nigeria Judiciary is not an undertaker. Please tell him, we are waiting for him in the Court. Anambra is not Imo State, where a fourth candidate in election suddenly became a governor.”

Tracknews Online recalls Senator Uba, had rejected the outcome of the Anambra governorship exercise in a statement released on Thursday by the spokesperson of his Campaign Organization, Ambassador Jerry Ugokwe.

The APC candidate accused INEC, security operatives and the Anambra state government of engaging in widespread electoral fraud and manipulation which saw him lose the poll.

Uba stated that the election was characterized by widespread irregularities, intimidation, and voter suppression in order to allow APGA and Soludo to win the exercise.

Related Topics:“Anambra Is Not Imo” – Umeh Replies Uba Over Plans To Challenge Governorship Victory Of Soludo
Up Next

Anambra Election: “We Have Not Congratulated Anybody” – APC Publicity Secretary In Trouble For Congratulating Soludo