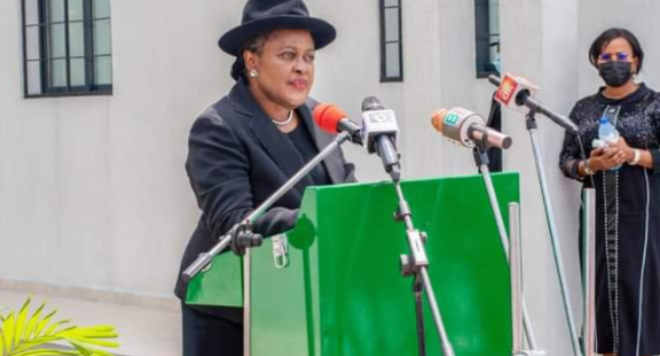 Tracknews Online reports that the PDP made the condemnation in a statement signed by the National Publicity Secretary of the PDP, Kola Ologbondiyan, on Tuesday.

Recall that security operatives had stormed Justice Odili’s home in Maitama, acting on a purported court warrant to carry out a search on her home.

However, the Federal Government through the Minister of Justice and Attorney-General of the Federation, Abubakar Malami, denied any involvement in the raid.

According to the PDP, the invasion of Justice Odili’s Abuja residence is part of a plot by the ruling All Progressives Congress (APC) to hijack the 2023 elections.

The opposition party described the invasion as horrendous, rascally, irresponsible, and completely unjustified, adding that the raid was an assault on the judiciary.

The PDP, however, asked Nigerians to continue to demand that the real perpetrators of the attack on Justice Mary Odili be exposed and brought to book.

The statement read in part, “This is more so as the pawprints of the APC are visible in the incident, in its desperation to cow the judiciary and subvert the cause of justice ahead of the 2023 elections.

“It is clear that the attack on Justice Odili is part of a renewed script by the APC. Nigerians will recall how, ahead of the 2019 election, former Chief Justice of Nigeria (CJN), Justice Walter Onnoghen, was clandestinely yanked off from his hallowed chamber, preparatory to the massive rigging that characterised the 2019 Presidential election.

“Nigerians can equally recall how respected judges were assaulted by the APC administration through obnoxious sting operations in a bid to arm-twist the judiciary and set the stage for the endorsement of a culture of impunity that characterised the 2019 elections.

“The PDP, however, cautions the APC and its Presidency apparatchik to know that times have changed. Nigerians are not ready to stomach a repeat of APC’s coordinated assault on our institutions of democracy, but will firmly resist them with every means available within the ambit of the law.

“The party also urges the judiciary to remain firm and not be deterred by the suppressive proclivities of the fizzling APC, which has since been rejected by Nigerians.

“The PDP calls on Nigerians to stand in defence of our democracy by continuing in their demand that the real perpetrators of the attack on Justice Mary Odili be exposed and brought to book.”

Related Topics:‘APC Desperate To Hijack 2023 Elections’ – PDP Reacts To Raid On Justice Odili’s Residence
Up Next