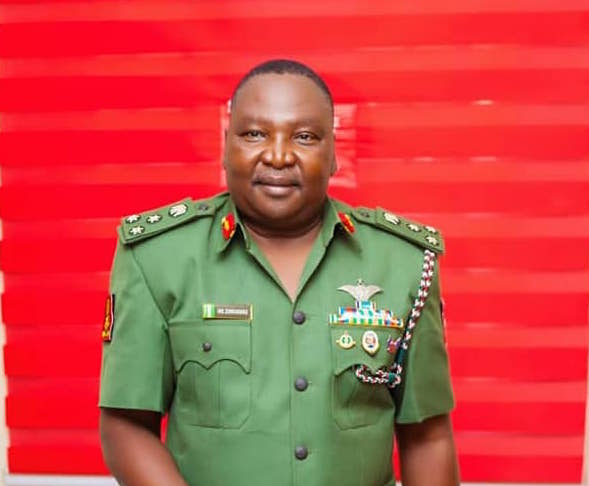 The Nigerian Army headquarters in Abuja has announced the death of a senior officer and three soldiers, who were killed in a shootout with Islamic State West Africa Province (ISWAP) fighters in Askira Uba Local Government Area of Borno State.

The deceased senior officer, identified as Brigadier General Dzarma Zirkusu, and his soldiers were said to have been killed while providing reinforcement in a counteroffensive against the terrorists, successfully defending the location.

The Director, Army Public Relations, Brigadier General Onyema, who made the announcement in a statement, said the soldiers supported by the Air Component of OPHK have destroyed five A-Jet, two A-29, two Dragon combat vehicles and nine gun trucks manned by the terrorists.

Nwachukwu said in a statement issued in Abuja”

‘Sadly, a gallant senior officer Brigadier General Dzarma Zirkusu and three soldiers paid the supreme sacrifice in a very rare display of gallantry as they provided reinforcement in a counteroffensive against the terrorists, and successfully defended the location.

‘The family of the senior officer and soldiers have been contacted.

‘The Chief of Army Staff, Lt Gen Faruk Yahaya, deeply commiserates with the families and relations of the fallen heroes. He has also directed that the troops continue in the ferocious counteroffensive and hot pursuit to eliminate the remnant of the fleeing terrorists.’

Related Topics:3 soldiers killed in shootout with terroristsBrigadier General
Up Next