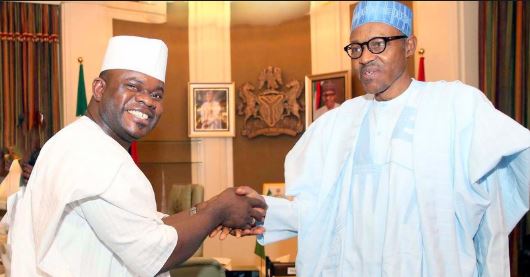 The Kogi State Governor, Yahaya Bello has praised the President of Nigeria, Muhammadu Buhari describing him as a leader who only has the interest of the country at heart.

He said contrary to common practice, President Buhari has no foreign bank account, no home, property, or company outside Nigeria.

According to the Kogi State Governor, the only thing the president has are his cattle.

Governor Bello stated that Buhari has always been making sacrifices for Nigerians since the days of him being a military leader, up till now as a democratic leader but ‘ingrates’ are the ones who don’t appreciate the efforts of the president.

The Governor said Buhari has never stolen Nigeria’s money and that is why he and other ardent followers are supporting him to succeed.

He made the submissions on Wednesday when he played host to some traditional and political leaders from Daura and other parts of Katsina State at the Kogi State’s government lodge in Abuja.

“The president’s interest is you and I. He is the only president that so far doesn’t have a foreign account, nor any house abroad, or companies anywhere rather than his Cattle. Even when he was on the sickbed, he wished Nigeria well.”

He added, “He fought the civil war to keep the country together. He didn’t fight from his office but from the war front, which means he was ready to sacrifice his life for the unity of the country. This is a president that has never been found wanting to have touched one naira of Nigeria’s money and has been known to always allow the will of the people to prevail. So the very least we, as his disciples and ardent followers, can do for him is to ensure that we do everything to support him to succeed.”

Bello also used the occasion to reiterate his interest in the 2023 presidency and the hope of succeeding President Buhari.

“When Mr. President succeeds, he is not succeeding for himself, his success is for Nigerians, whoever is wishing him to fail, is wishing Nigeria to fail. Very soon, I am going to answer the call of Nigerians to run for the presidency,” he said.

Related Topics:Buhari Has No Foreign AccountOnly His Cattle – Yahaya BelloProperty Or Home Abroad
Up Next