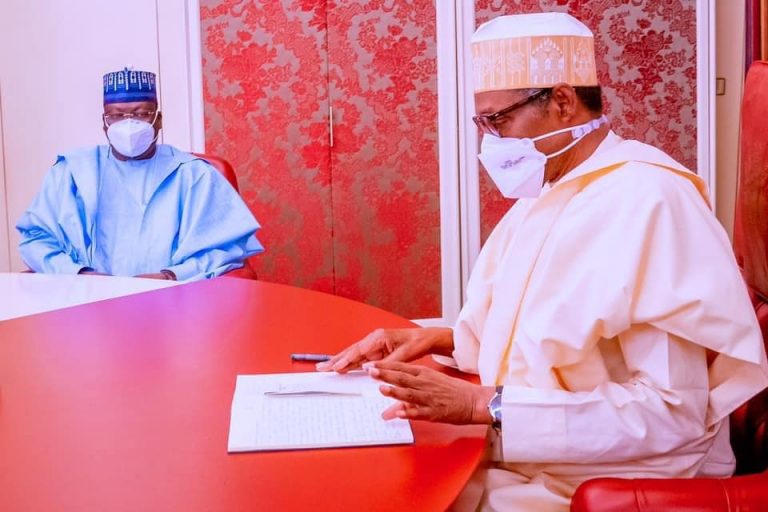 President Muhammadu Buhari is in a closed-door meeting with Senate President Ahmad Lawan at the Presidential Villa, Abuja.

Tracknews Online gathered that some of the issues expected to be addressed in the meeting are the Electoral Act Amendment Bill and the crisis rocking the ruling All Progressives Congress (APC) ahead of its forthcoming National Convention.

Following the passage of the electoral bill, APC governors and the National Assembly members have expressed divergent opinions over the mode of party primaries.

The governors were said to be in favour of the indirect primaries which has been in practice.

Recall that the APC governors had met behind closed doors at the Kebbi State Governor’s lodge in Abuja on Sunday night to discuss the crisis rocking the party.

Also, the governors had resolved to meet with the President over the contentious clause in the Electoral Act Amendment Bill which seeks to impose direct primary on political parties.

The Speaker of the House of Representatives, Femi Gbajabiamila, had revealed why he backed the passage of the amendment of the electoral bill for the use of direct primaries among political parties in Nigeria.

Speaking on Saturday at the National Children’s Dialogue to mark the 2021 Universal Children’s Day, Gbajabiamila said with direct primaries, a youth with leadership qualities had equal chances of becoming a candidate for an elective office just like any other person.

The speaker noted that this was one of the surest ways of securing the future of Nigeria, by giving people with multiple ideas the opportunity to be at the very top of governance.

Related Topics:APC Govs In Aso RockBuhari Receives Lawan
Up Next

Why Malami Ordered EFCC To Hand Over Stella Oduah’s Casefile