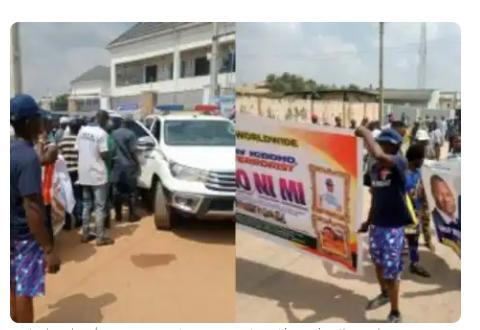 People who cherished of Sunday Adeyemo, popularly known as Sunday Igboho, who is the charismatic agitator and brain behind the proposed Yoruba Nation have on Saturday in Ibadan striked with a protest, demanding for his unconditional release.

Recall that Igboho has been and up till now in detention in Benin Republic over issue bothering on illegal migration, among other offences.

The protesters, who were mostly youths, carried placards with various inscriptions, asking passionately for the immediate release of the activist.

TrackNews Online gathered the protest was from the residence of Igboho situated at Soka area of Ibadan and matched toward the Toll Gate on Ibadan – Lagos Expressway and also the protesting youths were singing solidarity songs, calling on the Federal Government of Nigeria to briskly work on the release of Igboho from the custody of Republic of Benin.

Speaking with our national correspondent Mohammed Oluwatimileyin Taoheed, a lead protester identified as Kareem Adesope, advised prominent Yoruba leaders and other meaningful Nigerians to prevail on the Federal Government to make fast the release of the activist.

Related Topics:Chaos As Protest for Sunday Igboho's release rocks Ibadan
Up Next

Policeman Stabs Motorist In Imo, Flees With Another Driver At Gunpoint