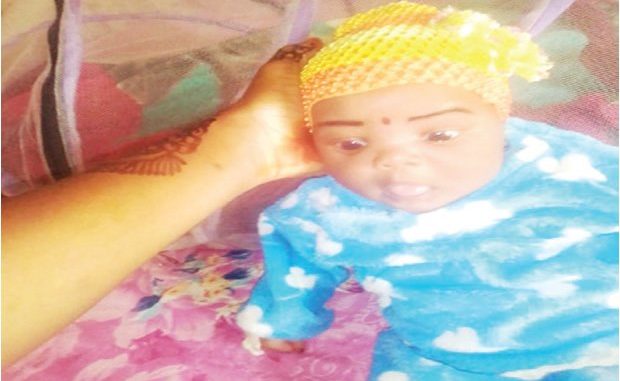 A young couple in Abuja are in panic over the disappearance of their three-month-old daughter, Fatima.

PUNCH Metro learnt that the child’s mother, Talatu Kabiru, was washing clothes when she asked her first child, five-year-old Mariam, to look after Fatima.

Mariam, it was gathered, was tricked by a yet-to-be-identified man to an uncompleted building, where the baby was taken from her.

The incident happened at Dakwa, a community in the Bwari area council of the Federal Capital Territory on November 8.

Narrating her ordeal to our correspondent on Wednesday, Mrs Kabiru said she had not been herself 10 days after the incident happened.

“The baby was inside the house while I was washing clothes. She was crying when I told her sister, who is five years old, to take her outside and play with her so that she could stop crying.

“She carried her on her back and was playing with her in front of the house. She said a man came to them and told them he wanted to buy them drinks and took them to an uncompleted building, where he took the baby from her, including the wrapper she was using to back her.

“The man told her to wait for him because he was coming with the drinks. When he did not come back, the girl came back home crying and told us what happened. We reported the case at the police station and we were told to wait for 48 hours before she could be declared missing. We have gone back; my husband, Musa, and I have been on this since then. He was in Imo when it happened. It has been tough for us. We hope that she is found.”

The FCT Police Public Relations Officer, DSP Adeh Josephine, could not be reached for comment as calls put to her line were not answered.

Also, a message sent to her line was not responded to as of the time of filing this report.

Related Topics:Couple Panic Over Disappearance Of Three-Month-Old Baby
Up Next

BREAKING: How NECO Withholds Over 80,000 Students Result Over N500m Debt In Kano