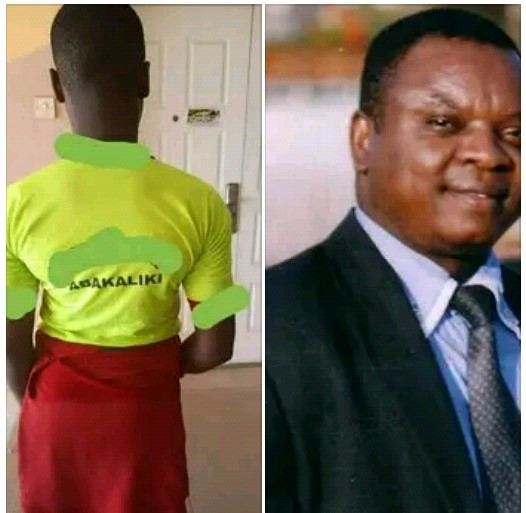 The Police Command in Ebonyi on Sunday said it had arrested a University Professor, Felix Anyaegbunam, for allegedly defiling a minor.

Mr. Anyaegbunam who is a Professor of Geophysics in Alex Ekwueme Federal University, Ndufu-Alike, (AE-FUNAI), is alleged to have been sexually violating his 12-year-old house help who is also the daughter of his gateman, for the past six months.

According to the image-maker of the command, DSP Loveth Odah, the suspect is in police custody. Sampson Oko Nweke, of Human Rights Defenders, HURIDE, who confirmed the incident, said that the suspect was arrested on Saturday, November 20.

” I was living in the village with my mother. My daddy brought me to live with Prof in Abakaliki. Since June this year, the Prof has been disturbing me. He always comes into my room and be doing what I don’t like. One day around 2a.m, I ran to my father at the security house and told him that Prof was pressing my bre*st.

My father told me to go back that he will talk with him in the morning. Sometimes, I will wake up and see myself n*ked. The other day, somebody was touching me at midnight. I woke up, put on the light and saw Prof lying on my bed n*ked

“He tried to touch me but I slapped him and pushed him out of my room. I was crying. One day, I woke up and my bed was soaked with bl*od. I didn’t know what happened. I told my father in the morning but he didn’t do anything. He used to tell me that, if I leave Prof’s house, who will pay my school fees?

In his words, the victim’s father said; “I am shocked and disappointed. My daughter has been complaining to me about what Prof is doing to her and I have always told him that what he is doing is not good.

“This professor did the same thing to my wife’s kid sister who I brought to live with him as a house help in 2017. But we didn’t know that, the prof was having s*x with the girl and later got her pregnant.

That time, she was 17 years and was in class five in secondary school but when the professor impregnated her, she dropped out of school.”