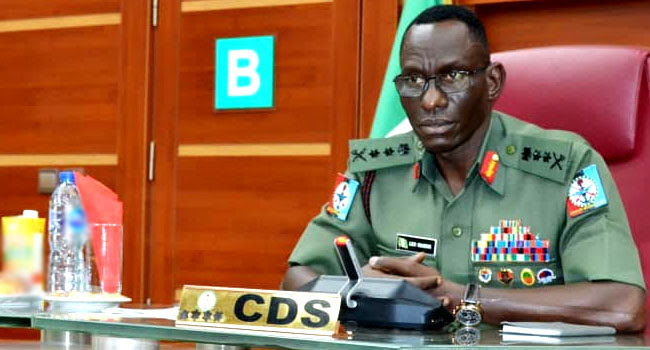 The Chief of Defence Staff (CDS) General Lucky Irabor has declared that the right thing to do is to wait for the white paper report on the Lagos Judicial Panel report before taking any position on the reported Lekki Toll Gate killing of protesters by soldiers.

The CDS added that it is wrong to assume what is coming from social media about the panel report is the absolute truth.

Tracknews Online recalls the report of the panel led by Justice Doris Okuwobi disclosed that not less than eleven people were killed at the Lekki tollgate incident.

The report added that at least 48 protesters were either shot dead, injured with bullet wounds, or assaulted by soldiers.

However, Irabor who spoke with journalists on Tuesday in Edo State said until the white paper on the Lekki Toll Gate incident is officially released, Nigerians should avoid inciting comments and respect the sacrifice and efforts of the armed forces in maintaining peace in the country.

The CDS said he can’t verify the truth and authenticity of the contents of the report based on what social media is claiming and would rather wait until the white paper on the report is released before making comments.

He said the armed forces of Nigeria operate with all professionalism and are always guided by the rules of engagement guiding their operations.

Tracknews Online understands Irabor was on a familiarization visit to military formations in Edo State and had taken time to visit Governor Godwin Obaseki when he made the comments while addressing journalists after his meeting with the Governor.

He said: “I am sure those of you in the media must have seen that there is a report that was released though in my view a wrong channel that is making the rounds in the social media.

“Whether it is a true report, I can’t tell but I would like to indicate that the normal procedure is to have such a report submitted to the convening authority and then there will be a white paper based on which one can make informed comments.

“It will not be right to disparage men and women who have worked so hard to ensure that the territorial integrity of this nation is kept intact; so in the meantime until I see the full report I may not be able to… but I can assure you that the armed forces of Nigeria are well disciplined and we do not engage in any ignoble acts.

Earlier, Governor Obaseki while commending the efforts of the military in securing the country, had sought the help of the CDS in combating and overcoming bandits and criminals operating in the forests of Edo and its waterways.

The Governor particularly identified the Okomu axis, which borders the Ose River as an area the criminals use for their operations.

“We find bandits and criminals coming there to undertake massive logging of woods and transport them; they now buy arms to reinforce their activities there. I am glad you came with all the men in the navy to see how you can give us additional support to patrol the waterways to checkmate the activities of these criminals,” Obaseki said.